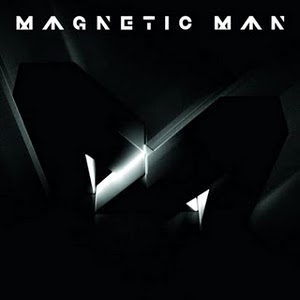 Look, Magnetic Man were never going to make a bad record. There’s too much talent between the group’s members, Skream, Benga and Artwork, for that to happen. Even when the ideas are unambitious, there’s a natural precision to them that makes them hard to deride. ‘Anthemic’ effortlessly smacks Joker’s ‘Tron’ out the park with its ‘80s synth chords, while ‘Ping Pong’ echoes the spacious, dark Funky of Fis-T and Jay Weed with snapping snares and percussion that drips like condensation from underground stalagtites.

There are plenty of good tracks here in fact: the dry-mouthed robo-stutter of ‘K Dance’; the end of the night breakbeat trance of ‘Perfect Stranger’; the delicate, xylophone-led intro ‘Flying to Tokyo’. But ultimately, the feeling you’re left with when the album’s over is that it could have been a lot better, and a lot more adventurous. As individuals, Magnetic Man have already proven that they can write dubstep tunes like ‘Karma Crazy’ in their sleep, so how often, genuinely, do the three of them get out of second gear here?

The only disastrous track on Magnetic Man is ‘The Bug’, with sixth form lyrics (“Ravish your conscience with total impurity / I am the bug in this global community … take evolution higher”) that Marilyn Manson would balk at. Even ‘I Need Air’, the trance-tinged first single from the album, doesn’t have anything wrong with it per se – the individual parts of the song are in place and on point, but together the results aren’t remotely interesting or unique. In a way, it’s a microcosm for the whole album. Magnetic Man may represent dubstep’s biggest record to date, but Columbia signing it was hardly a major risk, and they’ve been rewarded with an equally safe choice by their artists when they could’ve used the platform to make something really special.