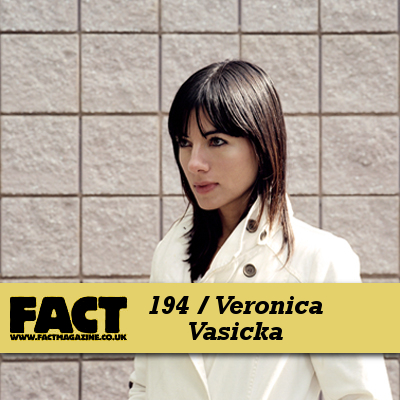 FACT mix 194 is by Veronica Vasicka.

Founder and beating heart of the Minimal Wave label, the New Yorker has for the past five years been engaged in a passionate mission to unearth forgotten gems of the late 70s and 80s DIY synth-pop boom, making available to modern listeners music that originally saw release only via absurdly limited cassette runs, if at all.

A co-founder of East Village Radio, Vasicka managed the station when it was still a pirate, and during this time began seriously collecting raw, bedroom-born music from the post-punk, minimal synth and cold wave spheres. She coined the term ‘minimal wave’ as a catch-all description for the stripped-down sounds that she was buzzing off, and set up Minimal-wave.org as an online information resource, posting interviews, photographs and more. It wasn’t long before she began tracking down the most obscure artists and reissuing their work.

The first Minimal Wave release was a mini-LP of selected tracks from the 1982 New Mexico cassette by UK duo Oppenheimer Analysis, which has just been repressed in its third limited 12″ run due to popular demand. Since then we’ve almost lost track of the number of ravishing releases Vasicka has put together, but we can heartily recommend Sudeten Creche’s Are Kisses Out Of Fashion?, Linear Movement’s On The Screen, Martin Dupont’s Lost And Late, Turquoise Day’s Alternative Strategies, Deux’s Decadence and the self-titled In Aeternam Vale collection. Each of these bands combine punkish perversity and a thirst for electronic experimentation with real pop nous, making for some most of the charming and incisive music you’ll ever hear.

For Minimal Wave, limited edition, heavyweight vinyl is the order of the day, with lavish packaging that replicates or pays homage to the original artwork, and with additional materials such as posters and glossy photographs included. These 7″s and 12″s aren’t just beautiful, they’re definitive – lovingly crafted gifts from a music-lover who, crucially, has genuine editorial and curatorial flair, and an absolute attention to detail.

Vasicka and her label came to the attention of a wider audience earlier this year when she teamed up with Stones Throw to co-compile The Minimal Wave Tapes compilation. Available on double-LP, CD and digital, it’s a fine primer; so too is the 20 Best: Minimal Wave feature that Vasicka penned for FACT back in January.

You can catch Veronica playing a rare UK DJ set for BleeD at XOYO in London on October 29, alongside live sets from Oneohtrix Point Never, Oni Ayhun and Teengirl Fantasy. Her FACT mix gives you some idea of what to expect: a healthy dose of torrid European melancholia intermingled with joyous analogue boogie, bug-eyed disco jackers and downtown electro-funk. Enjoy.