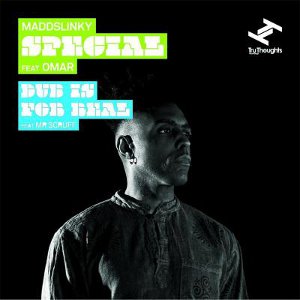 Maddslinky, Ruffcut Bias, Daluq, Talissman, Nu Design and 7 Wonders – Dave Jones has more aliases than an undercover spy, but he’s best known for his productions as Zed Bias and his early garage classic from 2000, ‘Neighbourhood’. The track re-emerged last year backed with a remix by UK funky lynchpin Roska and cast new light over a career which has helped form the bass-heavy shape of contemporary UK club music as we know it today.

Now talked about in hushed tones of reverence as a grizzled pioneer of early 2-step and garage raves, Jones is also bringing back his Maddslinky pseudonym. ‘Special’ is the first single taken from an album of new material, and an upbeat collaboration with fellow veteran, soul man Omar. As a euphoric blend of house and UK funky, ‘Special’ is pretty much on point; reminiscent of Bugz in the Attic or Basement Jaxx at their sunniest and slickest, it – politely – screams to be heard at Notting Hill Carnival while possessing a polished production and impeccable, feel good factor which could have made it a hit.

For those, like myself, who like their ears to suck on something slightly less saccharine, then head to Toddla T’s roguish overhaul. He’s given the original a hood and baseball cap, then taken it down the off-license to get pissed on 20/20 and wind up some pensioners. He may have removed some of the sunshine from the original, but his remix retains those housey hooks, just roughed up with a satisfying addition of bass. And, by throwing in whistles and a farting line, it doffs its cap to Maddslinky’s history while simultaneously indicating that his influence very much lives on. Special indeed.