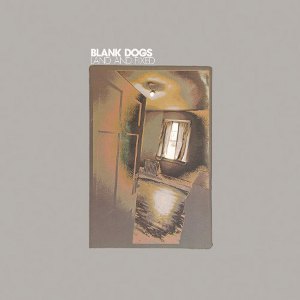 In the latest instalment in Mike Sniper’s stakhanovite rate of output we find him following the winding path that last year’s Under and Under marked out; a deeply skewed, blurred take on pop – but pop nevertheless –heavy with reverb and fuzz. Now, however, everything’s just that bit more sharply in focus than before. Sniper’s lyrics, for instance, once infamously indecipherable, now ring out cleanly, their melodies clearly defined. But with its brightly lit, spidery scrawl of tunes, Land and Fixed keeps Blank Dogs’ spark of wildness. It’s an invigorating listen, as buzzing keyboards and shards of new-wave guitars scramble over each other, reaching up into the virtual choirs of multi-tracked vocals which bring that transcendent intensity that only massed voices can.

What’s fascinating, and so effective, about Land and Fixed is how a sense of breathless immediacy – the very essence of pop – is created and accentuated through deliberately non-pop techniques. Check out, for instance, how the choruses sound, somehow, slightly off, as if they’ve been pitched-shifted into wobbling atonality. On tracks such as ‘Collides’ this creates a kind of sugar-rush unsteadiness, as if Sniper is desperately clinging onto the tunes as slip away from him. And, in turn, we too are thrown off kilter, into the fray with him, chasing the moment.

In places – such as the aptly titled ‘Blurred Tonight’ – the record comes across a little like a wide-eyed younger cousin to Daydream Nation. There’s a similar interest in combining noise and melody, but also something more intangible; the feeling of a euphoric, but slightly dazed teen-freakout. With their rickety drum machines and tumbledown walls of voices, the tunes sound close to collapse –sometimes almost exhausted – but always just manage to keep it together. Indeed, despite their jitteriness, there’s something strangely comforting about these tunes, with their inviting informality recalling, in the best possible way, some alt-pop campfire singalong.

And then, after a mere 40 minutes, Land and Fixed has worn itself out, drifting off to sleep with the Kompakt-esque shimmers of ‘Treelines’. It’s been demanding, sometimes confusing, but very much worth it; and I’m left with the bittersweet melodies of ‘Longlights’ and ‘Northern Islands’ echoing round my head for days afterwards.