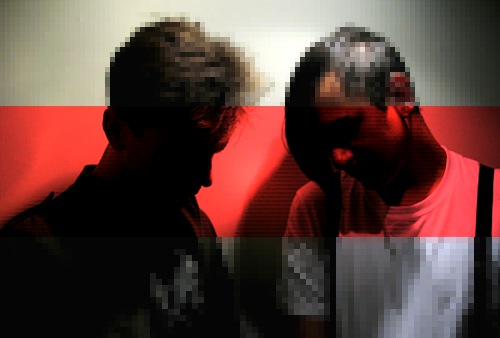 Frank (Just Frank) are a hard habit to shake.

The band formed in the South of France, as a way for members Anthem and KD to combine their love of dolorous post-punk and bleary-eyed synth wave with the uncompromising stance typical of the death and black metal which they grew up with. Upon hearing the band’s fine debut album, The Brutal Wave, experienced ears will think instantly of The Cure – traces of the cinematic ambience, clipped percussion and stick-thin arpeggios which defined Robert Smith’s band around the time of Seventeen Seconds and Faith are palpable in almost every one Frank (Just Frank)’s songs. The guitar break on album highlight ‘Mr Itagaki’ is at once emotionally untethered and geometrically locked, recalling not just The Cure, but also Wire circa 154, John McGeoch’s work for Magazine and the Banshees, and even Johnny Marr’s McGeogh-inspired riffage for The Smiths.

Why mention all this? Well, what makes Frank (Just Frank) interesting is that they’re not afraid to declare their influences. While most new acts spend their lives trying to delude themselves and the public that they are somehow blank-page innovators and originators, Frank (Just Frank) recognise themselves as part of a continuum, and do nothing to hide the fact. What really matters to them is the honesty, viscerality and emotional force of their writing and performance – qualities which they possess in abundance.

Having spent most of 2010 trying, and failing, to get ‘Mr Itagaki’ out of our heads, we exchanged a few e-mails with KD and Anthem, and quickly found ourselves talking about dreams, inverse fascism and the life of the outsider.

How did you first meet, and what music did you bond over? Where does the term ‘brutal wave’ derive from?

KD: “We met in school in the south of France as young teenagers, and bonded over a shared interest in what we considered ‘extreme music’. It started with simple rock and metal bands, but rapidly turned towards death and black metal, of which there was a strong scene in the area where we grew up, and in parallel also post-punk and 80s pop. I think the blending of these two currents led us to Frank (Just Frank); we thought there was an almost visceral energy in post-punk which resonated well with the musical approach of extreme metal bands. Frank (Just Frank) basically just started with the intention of playing dreamy post-punk inspired by Depeche Mode and The Cure, but with a ‘no compromise’ approach borrowed from underground metal.”

“‘Brutal wave’ was coined for the reasons I’ve just outlined: ‘brutal’ is a prefix derived from the metal vocabulary, one used to describe the sound of bands putting a bigger emphasis on the the ‘extreme’ aspect of their sound – hence metal fans will make a difference between death metal / black metal / grindcore  and brutal death / brutal grind. This jargon, and an understanding of the musical nuances it described, was like second nature to us when we grew up: the fact that Deicide was death metal as opposed to Cannibal Corpse which was brutal death, was the kind of self-evident fact that we based our early musical knowledge on. Since we were trying, with Frank (Just Frank), to play post-punk (i.e. ‘wave’ music) with this underground metal edge, the term ‘brutal wave’ came very naturally.”

How did your association with Wierd come about?

A: “The first person to hear about us was Glenn Maryansky from Blacklist (who’s now drumming for Chamelons Vox). He heard some of our demo tracks on MySpace and asked if he could play some of them at the Wierd party on Manhattan’s Lower East side. This was two years ago. He first started playing one track a week, then two, then the entire demo at practically each party. So naturally the almighty Pieter Schoolwerth, cold wave guru of Wierd records, invited us to come over to NYC to play a few shows. So we showed up for two gigs and after that he offered to release a CD-R EP from us. Turns out he wanted an album in the end, so we signed to Wierd records officially last summer and released The Brutal Wave.” 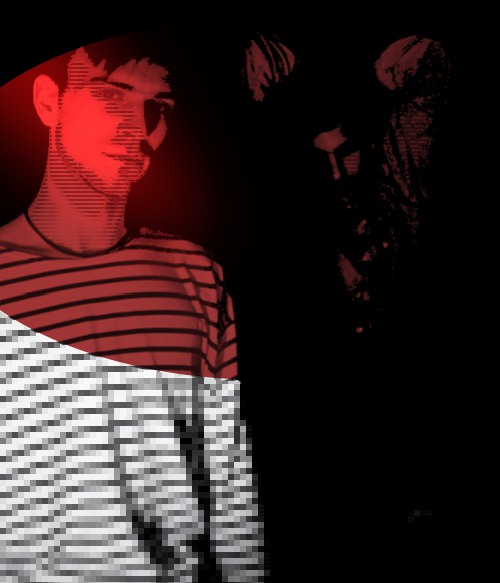 “I love this world, but I also hate it.”

Are there any contemporary, up-and-coming artists who you’re particularly into or feel an affinity with?

KD: “I won’t mention the obvious other Wierd bands, but will keep it local and mention Soviet Soviet form Italy, with whom we’vejust released a split. There sound is quite different to ours – but we really complement each other. Their live delivery is very powerful, I strongly recommend seeing them perform on stage. Another mention goes to Ancien Regime, also from Italy, who have also just shared a Mannequin release with Brooklyn’s Led Er Est. Two other bands we have great respect for, musically and personally, are Dolina from France and Bonjour Tristesse from Sweden, both truly awesome bands who contributed with us and Automelodi to a recent release from La Forme Lente.”

A: “Oh my god, so many. The band we’ve shared a stage with the most is Soviet Soviet from Italy. They’re tremendously lovely guys and even better on stage. Look out for that name, they’re the future sensation in post-punk. We’re also personal friends with Xeno & Oaklander, Martial Canterel, Ancien Régime and Dolina but I’m so fond of the Brooklyn synth scene and all the other bands that are signed to or related to Wierd records. I also enjoy and support what’s released through Captured Tracks, Falco Invernale and La Forme Lente in France.”

It’s virtually impossible not to compare your guitar sound to The Cure, particularly circa Seventeen Seconds, Faith and Pornography. Are you fans? Did you find yourself trying to capture a certain something of theirs in your own music?

KD: “We are indeed Cure fans, and were very influenced by their discography at the time we wrote some of the songs on the LP, and probably still to this day. I think something which did inspire us in our early was days was their [The Cure’s] potential to evoke the feeling of dream, or rather the intense, shifting emotions which one surrenders to in sleep – and indeed, sleep, dreams and nightmares are recurrent themes in The Cure’s music. Songs like ‘Die In Bed’ hold a close kinship to their evocative, dream-like music – loose and blurry and yet strongly driven by emotional memory. I would personally relate this song to Faith in particular, which has been a tremendously influential record for us. It’s no surprise that the back cover of our record portrays us asleep, experiencing the ‘dream’ as I described it earlier.”

How would you say the sound and imagery of Frank (Just Frank) reflects your personal situations?

A: “Well, take this: the cover of our LP depicts a member of the French resistance shaving the head off of a young girl who slept with a Nazi occupier. In this situation, who’s wrong and who’s right? The image is shocking but the feelings are mixed. I love this world but I also hate it.” 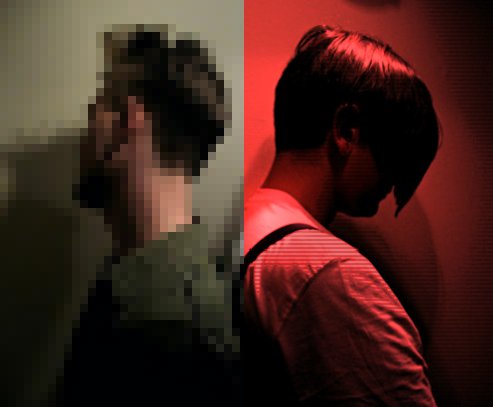 Would you say that the ironies, injustices and paradoxes of race relations and political correctness are a recurrent theme in your writing?

KD: “I would not go as far as to say that there are over-arching political themes in our songs; and we don’t let personal political opinion enter or music in any way. Our graphical or lyrical references to history and politics are mostly present for their evocative power, rather than to send out a specific message. We often use the stories we hear, the ones which trigger some sort of emotional response in us, in order to drive the songwriting process, as is the case with ‘Mr Itagaki’ or ‘The Closet Song’. This then somehow naturally bleeds into the imagery of the band. But we do not intend to express any personal views with it, simply convey an emotion rather than an idea. We tried to shift the attention away frm the historical and poltiical content of the images used for the album artwork, by distorting them with an overlay of pink. Hopefully our imagery will be understood as being saturated with emotion, not ideology.”

There’s obviously been a huge wave of renewed interest in cold wave, minimal wave and the more electronic side of post-punk in the past couple of years. What do you think the reasons for this are?

A: “Gosh, I don’t know. I think the first thing that could explain this is that there’s a general focus on old tunes and consequently there’s renewed interest in the way of listening and producing these tunes. People realize MP3s aren’t that great, and start collecting vinyl. People also realize that computer-generated sounds, no matter how practical they are, will never retain the same quality as analog synths. I think this kind of mentality naturally leads to an uprising in taste for the electronic sounds of the 80s, with a parallel interest in guitar based post-punk.”

KD: “I don’t think there necessarily is an obvious reason why these genres are now more exposed to audiences; other than the fact that it is generally decent if not brilliant music depending where you stand, which used to be near impossible to get hold of. Undeniably, the bands which we retrospectively classify as cold wave have dwelled for long time far outside the main musical radar – which probably owes something to the highly personal and DIY nature of their music and record labels. You get the impression that this music needed isolation and a lack of connections with the mainstream music industry to take the forms it has evolved into.

“As a band, we too experienced this disconnection, and how it influences you to write songs in a certain way. I mean recording in our parents’ houses using second-hand tape players, finger-tapping our drum loops on preset toy keyboards and running an electric guitar through too much reverb. We honestly did not do that because it was trendy (we were living in practically rural towns in the south of France, not present-day Shoreditch, so trust me). It was simply an unpretentious attempt at imitating the sound of our favourite bands, not obscure underground cold wave bands – we were not even aware of cold wave back then – and with absolutely no audience but ourselves. I like to believe that this is how most of the original cold wave was done – I certainly get that feeling from bands like Opera Multi Steel or Guyers Connection.”