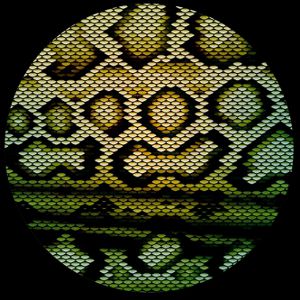 Hyperdub’s on a faintly minimal tip with these LV joints. A nagging high-frequency synth gives ‘Boomslang’’s technoid flex a distinct ‘Who’s Afraid of Detroit’ / ’Township Funk’ vibe. ‘Zharp’ is a considerably stranger creature – an anaemic pirouetting synth figure propelled by a loping half-step thud. Both tracks feature the kind of molasses-thick bass that will loosen fillings at the most discerning dances.

LV’s discography is pretty small so far, but these are strong additions to their body of work and Hyperdub’s canon in general. Meanwhile Kode9’s great chameleon abides, its beady eyes swivelling, considering its options for new directions in which to move, leaving us all wondering what it’s going to look like next.