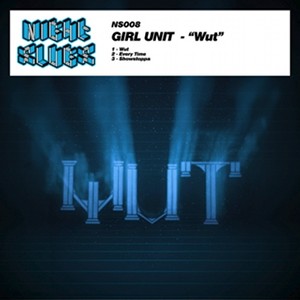 It feels a bit pointless to write about a release that was being proclaimed single of the year by some of the most influential figures in bass music before it was even released, but the eighth release on Night Slugs fully deserves any extraneous, unnecessary further praise it can greedily gobble up. After already making quite a splash with ‘I.R.L’, London’s Girl Unit drops an atomic bomb with ‘Wut’ that incinerates his already high standards and sweeps the ashes away in forceful gusts.

‘Wut’ is the kind of uber-anthem bound to induce the kind of awestruck stupefaction as exemplified in its vocal refrain. Put simply, ‘Wut’ is massive, euphoric, a tune, big, banging, thrashing, whatever adjective you might want to throw at it; it satisfies every and all criteria. Queasy drum machines stumble over pseudo-trance pads and dramatic hi-NRG-on-speed synths that would be shrill if they weren’t so catchy. But when the vocals hit, all bets are off. Sure, every UK producer worth his weight in acetate has been slicing vocals to unrecognizable extremes this year, but the samples on ‘Wut’ carry a kind of formidable gravity, their utter seriousness contradicted only by how ridiculous they sound. Helium voices stampede and disperse, making way for the unforgettable “What! What!” exclamation that brings forth a cascade of ear-candy so sweet it’s nearly sickening. It’s the equivalent of a drag queen snapping her fingers in your face; do you laugh, play along, or do you run?

It would be foolish not to mention Girl Unit’s prominent airing of juke in recent months, represented perhaps by the skittering drums that hover obsessively over everything. But most interesting is how ‘Wut’ belies a distinct appreciation of bombastic southern hip-hop; it’s implied in the gaudy overtures of its namesake and fully laid out in the single’s b-sides. ‘Every Time’ burns with the same alchemical blue flame that powered classic tracks like T.I.’s ‘What You Know’, sinister triumph undercut by its very synthetic nature. Of course, this is Night Slugs, so the track balances nearly atonal vocals on a swaggering, start-stop rhythm that swallows up the horns and spits them back out at will. The most explicitly hip-hop is ‘Showstoppa’ – even featuring those distinctive grunted “heys” – it lays tense, darting 808s over a cresting wave of Mannie Fresh horns and fluorescent synths that go off like handheld sparklers.

The kind of year Night Slugs is having is the stuff of legend, but what’s most impressive is how Bok Bok, L-Vis and co. seem to be making it up as they go along. ‘Wut’ is the kind of music that sounds intriguingly alien and instantly, insatiably desirable the second you hear it, yet it still somehow fits perfectly in with the Night Slugs ethos. What might be called “house” music (in terms of Girl Unit, your guess is as good as mine) rarely owes this much to hip-hop, juke, and dubstep, and even going by the Slugs’ track record it’s a stunning feat of chemistry. I’m not sure if I’m ready to call it single of the year, but it’s damn close.