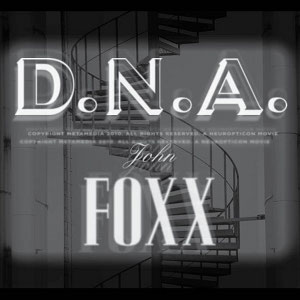 Instrumental throughout, DNA is John Foxx’s first album since 2009’s Mirrorball, a collaboration with former Cocteau Twin Robert Guthrie, and while much of it is composed and performed in the ambient mode that Foxx has tended to favour over the past decade, there are several instances and intimations of the stark electronic pop sound that brought him to the world’s attention back in the late ’70s, first as frontman of Ultravox and then via his extraordinary, Ballard-inspired solo debut, Metamatic – a touchstone of urban alienation that thirty years on has lost none of its grisliness and gleam.

The new album begins with ‘Maybe Tomorrow’, a polite synthesizer workout that fails to capture the imagination; it sounds less like an intended instrumental and more as though Foxx’s vocals are simply… missing. From there, things improve considerably: ‘Kaiyagura’ and ‘Over The Mirage’ revisit the terrain explored by Foxx and Harold Budd on their seminal 2003 set Translucence + Drift Music, doleful piano melodies providing the meat for an elegant and immersive essay in reverb. There’s a similar mastery of echo in the divine ‘A Secret Life 2’ and ‘A Secret Life 7’, the latter coloured with ominous bell tones that put me in mind of Ghost Box, a label that Foxx is known to admire.

It quickly emerges that the most successful pieces on DNA are those that are ambient-leaning – the magnificent ‘City Of Mirage’ sounds like an addendum to Foxx’s Cathedral Oceans trilogy, expansive and full of awe for the architecture of spirituality, if not spirituality itself, while ‘Violet Bloom”s jumble of field recordings and chimes has a pastoral quality to it, summoning the mid-’90s peregrinations of Labradford and Manitoba. This isn’t to say that some of the more electronic numbers don’t work: the insistent ‘Flightpath Tegel’ sounds like it could have been sourced direct from 1981, but then of course this kind of chilly synthesizer music will always sound like the future; it’s a timely reminder that everyone from Drexciya to Oneohtrix Point Never owes Foxx a genetic debt.

DNA is fundamentally an audio-visual project – and the DVD that accompanies the album sets its music to short films by the likes of Macoto Tezka and Ian Emes. Taken a purely musical entity, it’s a fine overview of Foxx’s talents – from “quiet music” maestro to purveyor of pulsating synth noir – but it leaves me hungry for what’s to come, and for the return of Foxx’s voice in all its vigour and versatility.