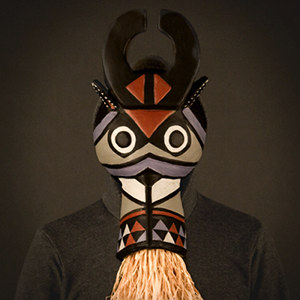 From a collection of original music and collaborations to a slew of talked about remixes, SBTRKT’s rise to notoriety has been ever-so-slightly meteoric. Here in his second release for Young Turks the producer sheds yet more light upon his metamorphic sound.

‘Look At Stars’ on the first listen is reminiscent of the sounds of Metro Area, although it ventures far beyond and firmly establishes itself in a sound world all of its own. A solid dance floor mover in itself, the track is given real weight with the distinctive vocal talents of Sampha. The scat-like vocal edits, a possible breadcrumb from SBTRKT’s nu-jazz and broken beat past, jar nicely against the beat in a clever interplay of rhythms.

Title track ‘Step In Shadows’ links 2-step double time breaks with basslines that were prevalent in early FWD>> proto-dubstep. There’s nothing new or particularly exciting about this, but the textural changes across the track’s nearly five minute duration are slow, understated and hypnotic, and the exclusion of certain musical ideas, namely the omission of the kick drum on the first beat of select bars, provides just enough musical variety to keep the listener locked into the music.

‘Colonise’ utilises textural drum and percussion crescendos and swirls of chords over a chest rattling sub-section that creates a wholly euphoric club moment. A rumoured vocal version of this track, featuring Sampha again, has been made but there are no confirmed release details for this as yet. Then, finally, we arrive at the pinnacle of this record in ‘Hide or Seek’. Firmly based in the techno world it embraces the nuances of all its forms; Detroit, Berlin and London, but again never really escaping the 2-step influences that punctuate all of SBTRKT’s catalogue to date. The space, depth and presence of this track is what makes this entire record for me; maybe it’s just the dusty nature of the break, but there’s something about this piece of music that reminds me of RIP Groove, albeit its evil cousin twice removed.

‘Look at Stars’  and ‘Hide or Seek’ may be the clear highlights, but even in its slightly less interesting moments this record is gripping, and represents some of the strongest original work I’ve heard from SBTRKT thus far.