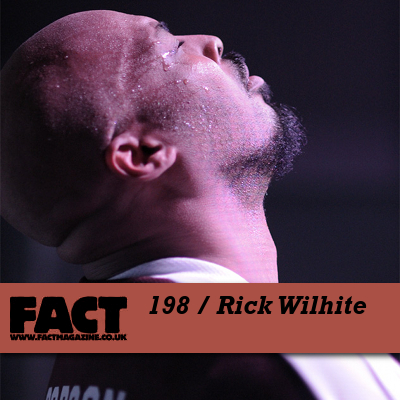 The Godson, Rick Wilhite, is at the controls for FACT mix 198.

As proprietor of the legendary Vibes store in Detroit, which closed in 2008, and as a DJ and producer, Wilhite has become a world-renowned purveyor of soulful electronic music. A core member of the Three Chairs production team that also numbers Theo Parrish, Kenny Dixon Jr. and latterly Marcellus Pittmann, he’s released a number of highly sought-after solo records, including a trio of KDJ 12″s that were virtually impossible to get hold of until Rush Hour began reissuing them last year.

Rick has put together his FACT mix to celebrate the release of Vibes New & Rare Music. This Rush Hour compilation is available as a single CD or spread across four 12″s, and is comprised entirely of new and exclusive tracks from Chicago and Detroit. Many of the names involved will be familiar to you – the likes of Theo, Pittman Kyle Hall, Urban Tribe, Glenn Underground and Wilhite himself (as The Godson) all contribute – but arguably the real booty is the material from less familiar faces, among them Ricardo Miranda, Derwyn Hall and Marc King. More info on the compilation here.

Rick’s mix showcases exactly the kind of low-slung, emotive house killers that his name has become synonymous with; it oozes class, and real feeling. You can stream and download (click the arrow on the right side of the player) via Soundcloud below. Tracklist to follow.