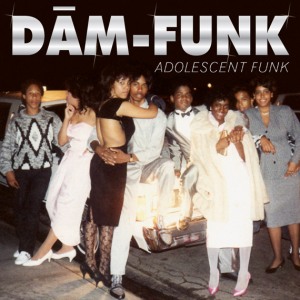 A collection of Dam-Funk’s tape recordings from ’88-’92, Adolescent Funk is a great relic in the development of the neo-funkster’s life and career. While Dam has had to defend his love of funk in interviews since the blow-up of his daunting double-disc full debut, Toeachizown, all along he has asserted that this is no trend for him, that he’s been following and honing the grooves of funk established in the early ’70s through all of their permeations to the present. The result is an album which reads as what could have been demos for any of his recent productions but stands alone as its own engaging curio.

Before talking about the music, just look at the album cover. This is some documentary realness: highschoolers in their element, late ’80s LA jheri curl culture, the whip, Magic’s Lakers, the confidence, the crew, those old boxy limos. That sweater! It’s not an act; this is life as art and back again.

The audio fidelity on this release is quite low, more of a result of the medium and less of the instruments, as the Korg M1, Linn Drum, and Casio SK-1 which were used to record it are most likely still tools in his kit. However, the dustiness and the flat, warble-y tape sound are quite endearing. Because of the whole glo-fi school of bedroom producers (or studio producers going for the bedroom sound) coming out of the woodwork, this release doesn’t feel out of place next to, say, Washed Out or Ariel Pink.

The album begins with a voiceover on ‘Fonky Island Life’ alerting us that “we are now departing LAX.” However, I feel like the whole time, we are just sitting in Dam’s Pasadena bedroom, late ’80s LA, as gangsta rap and house are coming up in the outside world. We hear influences of Zapp and Roger, Aurra, and Prince throughout the album, even catching broken beat shades of Dilla and Madlib’s future productions. The content is varied, often contradictory, with songs like ‘I Love Life’ urging people never to commit suicide pitted against the selfish realizations of ‘When I’m With U I Think of Her’. It’s funny and earnest, definitely getting inside his young mind that wants to be conscious, but one who can’t help but repeat ‘I Like Your Big Azz (Girl)’.

It’s definitely a bizarre, perhaps novelistic, release. It’s the sound of someone’s sound growing up. Will I want to listen to this in two years? Probably, because it’s quite distinct, at the very least. It’s rare to have an artist unearth old material like this and let it shine with all of its dents and dings. Either way, I’m swayed. I won’t ever second guess the Dam when it comes to authenticity. While so many dubious blog-vaulted artists try to claim they are the genuine article in their respective scenes, Adolescent Funk should quiet any of the haters, at least for the meantime.