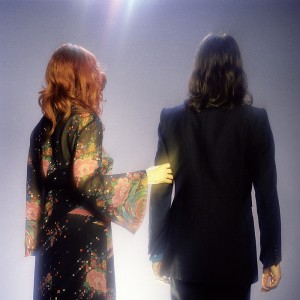 The final musical collaboration of DFA’s resident performance art duo sees Delia and Gavin take their systems music leanings in a more organic direction than the prismatic synthesis of ‘Relevee’. Starting out with an off-kilter (pseudo) glockenspiel pulse, the track builds layer upon layer of sound, from woodwind-like electronic glyphs to sweeping synth strings and chiming guitars, finishing after 10 minutes with an ominous bass motif. Like all Delia & Gavin’s work, ‘Track 5’ is thoroughly filmic – John Carpenter is one clear musical touchstone, Michael Nyman another. Fans of Lindstrom’s more out there moments or the sinister tiki sounds of Quiet Village will appreciate this, not to mention lovers of that oft-derided 70s musical phenomenon, Tubular Bells.

The flip side sports a remix by Innervisions duo Âme. It’s no easy task to rework a track as dense as ‘Track 5’ and with such a clear sense of movement from beginning to end. Âme’s answer is to break the piece down into three distinct parts, each of which build in the same way as the whole of the original. Thus, the first nearly four minutes are based around a locked 4/4 groove that slowly piles on the intensity as different elements drop in and out. The second part adds a sinuous bassline, which sounds great when the drum loop is finally unlocked at 5:25 and the dancefloor is allowed to cut loose. Âme gradually layers synth pulses and burbles on top, then withdraws them completely with a sudden clap. The final 1:50 is a variation on the locked groove opening, subtracting elements until only a reverberating rhythmic pulse remains. In sum, it works less well than the original, although the killer middle section should see it find favour with some discerning DJs.