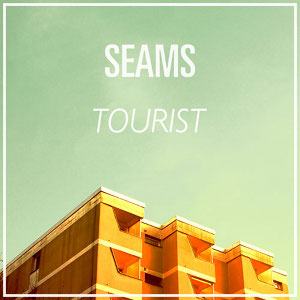 With the spate of amorphous electronic music producers expanding at an unmanageable rate, the need for producers to set themselves apart becomes all the more imperative.  English producer Seams does so on his new Tourist EP by placing his gentle “electronica” beats in a distinctly techno context. It’s not all press release hype (though he did in fact spend some time in Berlin, according to said press release hype), but a feeling that lies rather in the distant and faintly commercial-industrial complex that Seams imagines with his music. Opener ‘Hung Markets’ evokes both Four Tet and Pantha Du Prince, but buries its rather obvious chime melodies in factory soot, blackened clouds which eventually swell rhythmically in a manner that recalls the L.A. beat scene; it sounds like so many other things, yet nothing sounds exactly like this.

Paradoxically, the smoggy radio tower horizon of Tourist is strengthened by an almost antiseptic clarity: underneath the stratified buildup of pollution lies dumbfounding resonance. In ‘Nachtmusik’, chimes are flattened and blurred into sustained lines that kick up waste, only serving to emphasize the almost divine brilliance of its sounds as the dust recedes. Throughout the EP hides a deceptively strong low-end driven by powerful kicks and thrown-forward motion (the dizzy melodies on ‘Platz’ sound like they’re sliding slow-motion across a pinball machine), and it doesn’t seem too far of a stretch to imagine Marcel Dettman’s paws all over ‘Hung Markets’ if he were in a particularly experimental mood.

This type of in-between-scenes music can only fully succeed by somehow making genre irrelevant, a feat which very few achieve.  Some do it by just making up their own genre (Flying Lotus), and some find surprising ways to blend in decidedly pigeonholed musics in with their own ineffable beats (see Four Tet’s recent FACT mix). While Seams can’t really claim to have demolished the need for categorization, he’s done just as well and taken the intangible qualities of a community, the aural qualities of a place, and made them familiar in a foreign context. It’s the kind of thing that always makes for critically impressive listening, and thankfully, Tourist is a lovely record on its own terms anyway.