The latest diamond to be unearthed by Trunk Records is a previously unreleased score by Basil Kirchin.

It’s the soundtrack to Primitive London, Arnold L. Miller’s legendary 1965 documentary-cum-exploitation flick exploring the British capital’s seedy underbelly through footage of, and interviews with, strippers, mods, beatniks, swingers and countless other characters hustling, preening or simply testing the limits of the so-called “permissive society”. The film was recently issued on DVD and Blu-Ray by the BFI.

Though he languished in obscurity for much of his life, Basil Kirchin (1927-2005) is now widely regarded as one of the most uniquely experimental British composer-musicians of the 20th century, with artists like Brian Eno, Nurse With Wound and Broadcast expressing their admiration for his work. This is largely due to the efforts of Trunk Records impresario Jonny Trunk, who has issued a number of Kirchin library music collections and concept albums, notably Abstractions Of The Industrial North and World Within Worlds, and taken every opportunity to eulogise both the man and his art. Primitive London is Trunk’s latest Kirchin find, and we’ll let him tell you more about its origins:

“This unreleased 1965 score by the legendary Basil Kirchin marks his first foray into the world of film music. It pre-dates his library music compositions, but his distinctive sonic signatures were very much already in place; the insistent rhythms, complex melodies, slightly curious arrangement and a certain oddness are all here. It’s all too perfect that Basil Kirchin, a true musical maverick, was employed as a composer for one of the strangest movies ever to be made here in the UK. Why and how he was given the job will always remain a mystery, but his accompaniments to death, birth, beatniks and wife-swapping are here to enjoy for the very first time. There is no tracklisting, the cues are just numbered as they were when they came from the original quarter inch reel.”

The album is due to be released in December 2010 on CD and vinyl. Bonus material comes in the form of four unreleased tracks from The Freelance, an even more obscure pictured scored by Kirchin.

Those curious about Primitive London the film might want to read this essay by Iain Sinclair. 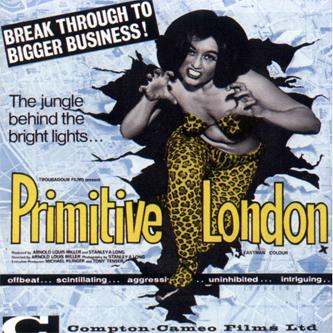