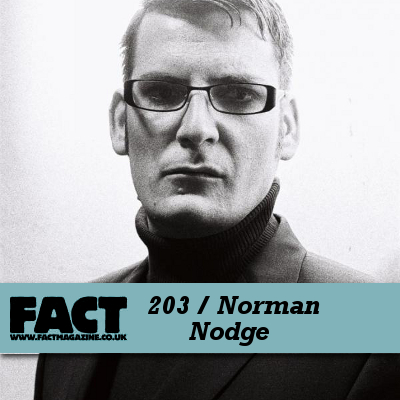 Norman Nodge is at the helm of FACT mix 203.

As a DJ the vinyl-favouring, Berlin-based Berghain resident is revered for his sets of jacking yet tunnelistic techno, and as a producer too he’s built a formidable reputation: two 12″s on Marcel Dettmann’s MDR imprint announced his arrival back in 2007-8, and were followed by a split release with Samuli Kemppi on Ostgut Ton (a sampler taken from Dettmann’s Berghain 02 mix) as well as an ever-increasing number of remixes for the likes of Peter Van Hoesen, Resoe and Function (Sandwell District). His latest original production is ‘Start Up’, the final track on Ostgut’s recently released Fünf compilation, a sense-battering 7×12″ set that also includes new tracks by Shed, Prosumer, Fiedel (MMM), Steffi and Ben Klock, all employing field recordings made at Berghain by Emika.

Nodge’s FACT mix is a high-octane affair, showcasing his uncommon ability to balance industrial textures with percussive funk. The tracklist is forthcoming, so for now just go ahead and download safe in the assurance that techno really doesn’t get much better. Come on, look at the guy. He means business.