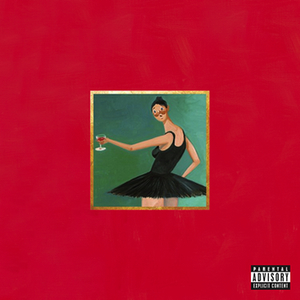 Kanye West’s fifth album, My Beautiful Dark Twisted Fantasy, has had the most extravagant press campaign in musical history behind it. There’s been outbursts on chat shows and Twitter, there’s been nude pictures, there’s been surprise performances at Facebook’s office and over the tannoy on a Delta Airlines flight. There’s not been videos; instead, we’ve had a thirty minute film (‘Runaway’) and a “moving portrait” (‘Power’). The entire build-up has been obscene.

And against all odds, the album has lived up to it. It’s one of the grandest hip-hop records of all time – not counting interludes, its shortest track is 4:17 – full of vocoder, guitar, narration and overheard betrayals, and it’s frequently torn between whether it wants to be a rugged, raw rap record or a grandiose pop opera. ‘Dark Fantasy’, the album’s opening track, sets out the formula: on one hand, there’s Kanye growling punchlines over a dope beat, on the other, the chorus is so majestic that the production has to bow to it, and Nicki Minaj narrates the intro in her faux-English accent. You think the track’s done, and that chorus returns for an extended encore. Like much of the album, and like Kanye himself, it teeters on the balance between hip-hop’s roots and its most capitalist ambitions, and somehow ends up giving you the best of both worlds.

MBDTF is obviously cinematic, and like most films, after its initial sunburst it builds up slowly. ‘Power’, and particularly ‘Gorgeous’ are good, but it’s with ‘All of the Lights’ and ‘Monster’ that the album really kicks into life. Again, one is soaring end of the night pop and one a hip-hop posse cut, and both feel equally important here. Nicki Minaj’s appearance on the latter has been talked up as verse of the year, and if you haven’t heard it yet then you need to. Jay-Z hardly slouches, but show-stealing doesn’t begin to cover Nicki’s verse.

The album’s peak though, comes with the double salvo of ‘Devil in a New Dress’ and ‘Runaway’, a pair of tracks more saturated in widescreen sadness that anything Kanye’s done to date, even 808s and Heartbreak. ‘Devil’ features ‘Ye and Rick Ross reminiscing over forlorn New York pianos and a star-eyed vocal loop, the world’s saddest guitar appearing mid-way, while ‘Runaway’ ends on a vocoder solo that could move mountains. Remember on Kanye’s first album, where he spent about five minutes at the end of that one track talking so endearingly about signing to Roc-a-fella, and about him and his mum going to Ikea? This is MBDTF’s resigned equivalent, with Kanye mumbling face down in a slurry of synths, cocaine and regret.