LA Vampires and Matrix Metals get So Unreal on new LP

LA Vampires has collaborated with Matrix Metals for a new LP, So Unreal.

As many of you will already know, LA Vampires is the current recording project of California’s Amanda Brown, former Pocahaunted member and co-founder of Not Not Fun (one of FACT’s recently anointed 10 best labels of 2010). She’s already been responsible for two of the year’s most absorbing records, a split with Psychic Reality and the self-explanatory LA Vampires Meets Zola Jesus. Matrix Metals is probably best known for last year’s Flamingo Breeze album, originally released on cassette by Not Not Fun before being picked up by Olde English Spelling Bee for a vinyl reissue.

There’s a fractured pop sensibility at work throughout So Unreal, with hooks aplenty and Brown’s dissolute vocals fairly prominent in the mix over a predictable – and wonderful – Vampires-Metals combo of plasmic synths, rugged beats and dubwise basslines. ‘Make Me Over’ and ‘Don’t Dance Alone’ are about as anthemic as lo-fi psychedelia gets; ‘Still Going Down’ and ‘Berlin Baby’ are weirder, more prismatic creations, while the closing title track comes over like Washed Out gone feral. This could be well be a late contender for albums of the year.

So Unreal is out now on digital and will be released on vinyl next week. The Wire are currently streaming an exclusive mini-mix of its tracks – check it out here. The less patient among you can check out individual clips of each track here. 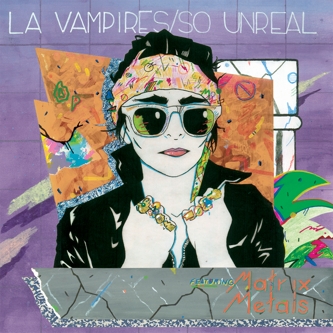