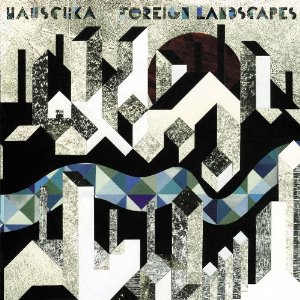 German composer Volker Bertelmann, a.k.a. Hauschka brings us a brand new album on FatCat’a modern classical imprint 130701. Until now, Hauschka has been primary known for his solo prepared piano work, and although this isn’t the first time he’s made use of other instruments in his music, this album certainly sports the largest palette he’s drawn from to date, making use of San Francisco’s Magik*Magik Orchestra to explore more diverse textures and timbres than ever before.

Instruments aside, the subtle acoustic choices, and the way they vary from track to track, is always something striking about Hauschka’s albums. On Foreign Landscapes, he’s opted for a predominantly dry studio feel which gives the record a slightly more uniform feel than past LPs, but also gives it a close, intimate feel which can often be lost on recordings of large ensembles. The piano frequently stands out against the rest of the ensemble, a result in part to the fact that they were recorded in different studios – the Tiny Telephone Studio in San Francisco and Studio Zwei in Dusseldorf respectively – but it also seems like a conscious effort to break up the overarching orchestral nature of the album’s sound.

Conceptually, Hauschka continues to deal in the autobiographical realm; where his last album, Furndorf focused on the composer’s memories of childhood, Foreign Landscapes deals with his experiences of traveling and touring. Musically this is reflected by a sound that’s much less rooted, with a feeling of constant flux amplified by ’60s-esque minimalistic devices, although there are moments where the music comes to rest and allows the listener to feel attached to their current stop. It’s a very personal album that requires quite a big investment from the listener to digest in one sitting, but for those inclined it’s well worth it.