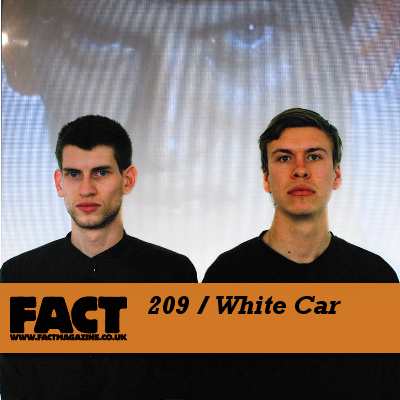 We’re delighted to have White Car in the driving seat (ahem) for FACT mix 209.

The dapper Chicago duo of Elon Katz and Orion Martin have quickly established themselves among our favourite new artists, debuting towards the beginning of 2010 with a self-titled EP on Rainbow Body Records, and following it with the brilliant four-track No Better EP on Hippos In Tanks, the label that’s home to Games, De’on, Laurel Halo and other rising stars of the US underground.

Like a lot of artists coming out of the woodwork around now, they’re strongly influenced by industrial, goth and EBM, but, as their FACT mix proves, their love for post-punk murk is genuine and discerning, and has nothing to do with hipster point-scoring. Though still possessed of a charming DIY ruggedness, their own music is complex and carefully produced; it sounds like the band are actually trying to stretch themselves to breaking point. Like the work of The Soft Moon, Raime, Tropic of Cancer and even Hieroglyphic Being, White Car’s records constitute a rigorously modern response a to 1980s tropes and values.

And of course Katz and Martin’s musical interests are wider than that anyhow: you can detect the impact of early house and Drexciyan electro on the supple, oversexed sound of No Better, and this is borne out by their FACT mix, which finds industrial overlords Front 242 and Severed Heads rubbing up against ESP’s soulful house jacker ‘It’s You’ and DMX Krew’s abstract breakers’ cut ‘Good Time Girl’. Evil genius; essential listening.