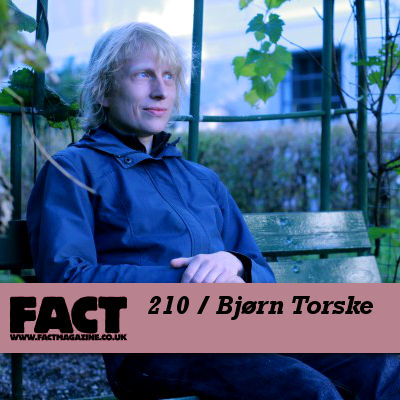 Keen readers will remember the Norwegian producer’s wonderful 2007 album Feil Knapp featuring in our 100 Best Albums of the 2000s, but he was a cult hero in the house scene of his native Norway and among the disco cognoscenti of the wider world long before that album’s release.

Torske hails from Tromsø, which is just north of the arctic circle and widely regarded as Norway’s capital of electronic music, having given us the likes of Biosphere, Royksopp and Mental Overdrive in recent years. His first techno-oriented productions in the early 1990s were picked up for release by Crammed Discs in Belgium and Holland’s legendary Djax-Up-Beats, and later by Reinforced, the London imprint run by 4Hero’s Marc and Dego.

After a stint touring as live synth player for Biosphere, and the release of an album on Djax, Torske took a break from production. Sporadic single releases found their way out into the world, but it wasn’t until 1999 that Torske returned in earnest. He began releasing 12″s through SVEK and Tellé Records, the latter also putting out his Trøbbel LP. Around this time Torske and his partner in crime, the late Erot, fashioned their own distinctive micro-genre, “skrangle-house” (literal translation: rattle house), essentially just a freeform, disco and dub-inflected but resoundingly dancefloor-friendly approach to house inspired by the UK’s Idjut Boys. Erot and Bjørn’s track ‘Søppelmann’ became the signature skrangle-house tune, and helped inspire a whole new generation of Norwegian producers, including Todd Terje, Prins Thomas and Lindstrøm.

Nonetheless, Torske remained an elusive character. When FACT interviewed Prins Thomas in 2007, we asked him who he’d most like to sign if money grew on trees. He replied: “If I could lure him our of his cave for a second, I wouldn’t mind getting some new stuff from Bjorn Torske.” Soon after, Smalltown Supersound unleashed Feil Knapp, easily the most kaleidoscopic and accomplished Torske LP to date. Rooted in disco-tinged house and techno, but with shades of dub, broken beat, Balearica, jazz, avant-electronics, krautrock and ambient, it’s just an impeccably composed and produced work, complex musical ideas conveyed with an easy-going charm.

Torske has just released his fourth album, Kokning. Its title refers to a kind of meal preparation peculiar to Norway: that of putting potatoes on to boil, going out to sea to catch a fish and then returning home to finish cooking. Not sure how that relates to the music, but we like it…Kokning is more rooted in acoustic sound than the heavily programmed Feil Knapp; even its crunchy rhythm tracks are derived from Torske’s experiments recording different sounds, instruments and textured objects in rooms of varying size and acoustics.

We’re absolutely delighted to have this legendary producer helming a FACT mix. His selection is diverse and discerning as you’d expect, with a clear emphasis on genuine musicality. The mix is anchored in classic On-U-Sound, with tracks from African Head Charge, Paul Haig, Creation Rebel and New Age Steppers figuring prominently alongside more frigid post-punk classics from Section 25 and The Durutti Column. There’s room too for the entrancing krautrock spiritualism of Popol Vuh, the expansive live techno of the Moritz Von Oswald Trio and a number of curios as new to us as they doubtless are to many of you. With the nights getting longer and the days getting colder, we strongly suggest you put some potatoes on to boil and give it a whirl.