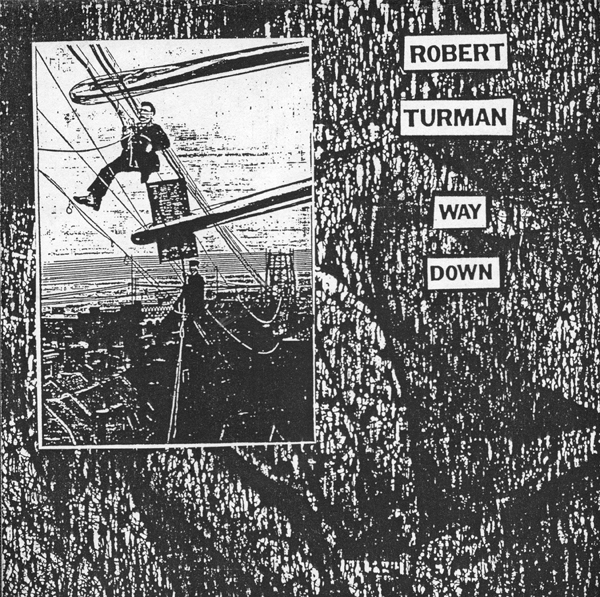 If you haven’t heard of Robert Turman, don’t be perturbed; hardly anyone has. A shame, because Turman’s contribution to the industrial and synth wave underground in the late 1970s and 80s was unique and substantial. He first rose to prominence as part of NON, collaborating with mainman Boyd Rice on the classic 1977 single  ‘Mode of Infection’/’Knife Ladder’, before leaving to pursue his own more expansive solo vision.

Turman released a number of cassettes over the course of the 80s, drawing on a wide range of experimental techniques. On Way Down, first released on Actual Tapes in 1987, he combined the noisy industrial aesthetic he was best known for with a spry, danceable minimal synth sound, albeit one fleshed out with guitars, pianos, tape loops and samples. It’s a great record, murky as hell but also engaging and accessible, and the new Dais edition – which is limited to 500 hand-numbered copies and includes new liner notes by Turman himself – represents its debut on vinyl.

There’s a bewilderingly large number of boutique record labels currently reissuing “lost classics” from the 80s synth and industrial underground, but Dais is one of the best, with a clear emphasis on the most grubby and characterful fare, as comfortable with neofolk as it is with electronics. Operated out of LA and New York by Ryan Martin and Gibby Miller (who collaborates with Troy Pierce as Louderbach), the imprint has compiled and reissued archival work by, among others, Deviation Social, COUM Transmissions and Maurizio Bianchi. Crucially, though, it’s releases a great deal of worthy new music – from the likes of Tony Conrad & Genesis P. Orridge, Sasha Grey’s noise project aTelecine, Cult of Youth and Cold Cave (the brilliant The Trees Grew Emotions & Died 12″).

The latest new new offering from Dais is The Kraken, an EP by veteran folk vocalist Andrew King (who has worked with Current 93 and Andrew Liles) and Brown Sierra. Find more information the label and all its releases here.

The Way Down tracklist:
A1. Way Down
A2. Lotek
A3. Mind The Gap
B1. Freedom From Fear
B2. Deadkingspeak
B3. Clean Living