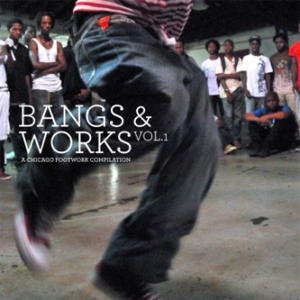 Structurally, juke in 2011 and grime in 2005 might not have a huge amount in common, but both represent musical forms with a localised underground following having their most recognised years to date. In grime’s case, this period of surfacing was marked by Run the Road, a perfectly timed compilation that introduced curious parties in the UK and beyond to the likes of Terror Danjah, D Double E and Crazy Titch, along with others – remember Ronnie Redz? – who didn’t make such a lasting impression.

What 2011 juke also has in common with 2005 grime is the fact that many will be familiar with a few key names – DJ Rashad and DJ Roc; Dizzee Rascal and Wiley – but unaware of some equally unique artists operating in the undergrowth of these genres. Its purpose as an introduction to artists like this is probably Bangs & Works‘ key selling point. The comp opens with the classic ‘Whea Yo Ghost At’, one of two tracks of helium fantasy from DJ Elmoe; squealing drum machine angels that are closer to Balam Acab than you’d expect. Further in, there’s a double salvo of neon freight trains from DJ Diamond, and some of the package’s most haunted moments courtesy of DJ Trouble’s disembodied voices and circling strings.

Juke and footwork is, at its roots, sample-heavy hardcore dance music, but much of its critical attention has focused on the role it can take on as avant-garde pop music. Bangs & Works gets the balance between the two spot on, pairing pure adrenaline rushes like DJ Roc’s ‘One Blood’ (not to mention Tha Pope’s raucous update of ‘The Lion Sleeps Tonight’, in ‘Jungle Juke’) with lo-fi surrealism from your DJ Nates and Elmoes, giving those interested the perfect opportunity to dip their toes into juke’e electric swamp.