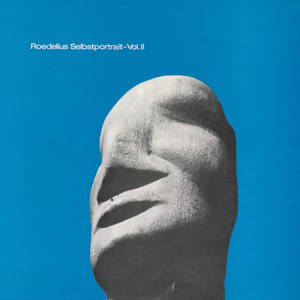 Available on: Bureau B LPs

Between 1973 and 1977, in between sessions for such legendary Cluster, Harmonia and Cluster & Eno albums as Zuckerzeit, Deluxe and After the Heat, Hans-Joachim Roedelius recorded a series of solo pieces in a casual, off-hand way at home in Forst, West Germany using reel-to-reel tape. Following the release of his first two solo albums Durch Die Wüste and Jardin au Fou, this disparate collection of piano/keyboard instrumentals was gathered together and released by Sky Records in two volumes, the first, in 1979, subtitled “Soft Music”, while Selbstportrait – Vol. II (1980) was dubbed “Friendly Music”.

If those subtitles (and the cover image – music as sculpture) indicate a conceptual debt of thanks to Brian Eno, it only serves to balance out the musical debt of thanks these proto-ambient pieces suggest he owes Roedelius. Listen first for instance to ‘Inselmoos’ (“island moss”) and then to ‘Moss Garden’ from Bowie’s Heroes and that debt is clear.

But while the tonal palette of these tracks and their tendency to blur figure and ground may have helped shape the likes of Music For Airports, Roedelius’s instrumentals are much more verbose than the spartan stillness of Eno’s ambient works, much more akin to Terry Riley’s A Rainbow in Curved Air in their jazzy extemporisation of theme.

Given the long period over which the pieces were recorded, it’s surprising how coherent both of these Selbstportrait albums sound. Now the grand old man of Kosmische Musik, Roedelius was already in his 40s when most of these tracks were laid down, suggesting that here was an artist already at ease with his muse.

Does the fact that he appears to have found his comfort zone lessen the effect of the music now? I don’t think so. This is contemplative music at close to its best – simple, but never simplistic; mellowed out but not overly mellifluous.

Highlights of Volume I include the music box melodies, twinkling, bejewelled but battered round the edges, of ‘In Liebe Dein’ (“All my love’) and ‘Minne’ (‘Courtly love”), the latter curiously now vaguely reminiscent of Wax Stag. As is ‘Arcona’, a mysterious-sounding exploration of low end theory over a primitive drum machine that could be reinterpreted as proto-trip hop. The slow dreamy, slightly sinister ‘Kamee’ (“cameo”) sounds fabulous, reiterating its point to great effect, with keyboards that make you think of Black Sabbath on a hitherto unknown late ’70s Space Disco mission. Elsewhere, the delightful ‘Staunen im Fjord’ (“marvel at the fjord”) lays down stately synth landscapes around which treated pianos float joyfully like so many cruise liners in the midnight sun.

Volume II, bookended by the 10-second logotone of ‘Signal’, offers more of the same. Standout tracks include the wonderfully named ‘Regenwurm’ (“earthworm”), the sparse charms of ‘Schonheitsflecken’ (“beauty spots”), the oriental fantasies of ‘Tee fur die Geisha’ and the beautifully weighted bittersweet meditation on the passing of time, ‘Alle Jahre Wieder’ (“every year”).

Nine parts buried treasure to one part ambient landfill, this is a welcome reissue of two important and under-appreciated works.