The Weatherbox label has unveiled the first of two limited edition Dead Can Dance vinyl box sets that they’ll be releasing this year.

DCD1 is a specially designed black featuring the band’s debut LP Dead Can Dance (1984), the Garden of The Arcane Delights EP (1984), sophomore album Spleen and Ideal (1986) and, appearing on vinyl for the very first time, their first John Peel session (1983).

Formed in Melbourne, Dead Can Dance was at its core a duo: Brendan Perry and Lisa Gerrard. Though after the release of their masterpiece Within The Realm Of A Dying Sun they went a little bit too Enya for our liking, pretty much all their works up to that point are unassailable: their debut is notable for its gloomier, grainier post-punk sound and mood, while Spleen & Ideal represents the full flowering of DDC as creators of soaring, baroque pop music as admirable for its chilling ambience and fanatic attention to detail as for its out-and-out symphonic bombast. The likes of Zola Jesus and Fever Ray owe them a significant debt.

The DCD1 4xLP box set is due to be released in the early part of this year. Details of DCD2 have yet to emerge, but it will presumably focus on Within The Realm Of A Dying Sun and The Serpent’s Egg. All the music in question was originally released on 4AD (Dead Can Dance were the label’s biggest selling act). 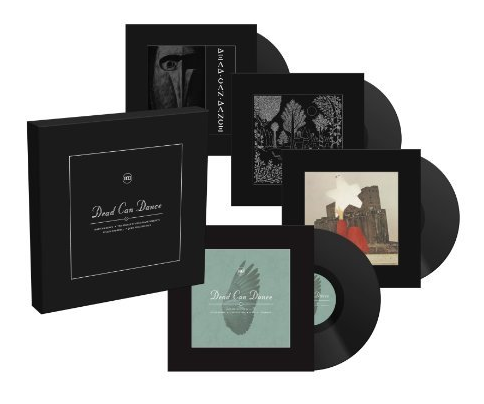 LP2: De Profundis (Out Of The Depths Of Sorrow) / Ascension / Circumradiant Dawn / The Cardinal Sin / Mesmerism / Enigma Of The Absolute / Advent / Avatar / Indoctrination (A Design For Living)

LP3: Carnival Of Light / In Power We Entrust The Love Advocate / The Arcane / Flowers Of The Sea