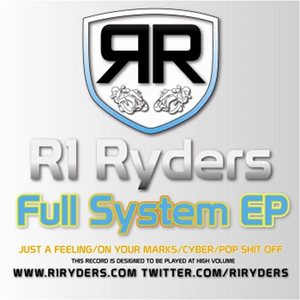 UK funky remains a close-knit and cagey scene, despite its occasional  flirtations with the mainstream and the rise in critical stock that occurred alongside its questionable association with dubstep. Centering around a sound that hasn’t changed all that much in recent years (but remains buckets of fun), often rudimentary and raw, perhaps most comparable to grime and bassline, two other scenes which have seen their fair share of stalling and irrelevance. Suffice it to say, you’re not usually going to look to UK funky to hear the most futuristic and forward-thinking dance music. But London’s R1 Ryders aren’t your average UK funky group – in fact, they’d rather you call it “Funkitek”, thank you – and their third EP Full System sees them mining the essence of UK funky and then building something much grander.

You can almost hear them detonate the genre on ‘Cyber’ as arpeggiated flames shoot from the wreckage, before the whole thing hits the ground with a sludgy, wobbly thud somewhere in between bassline and dubstep. As handclaps, bongos, and even slurred strings descend onto the proceedings, it becomes clear how rich Funkitek is, and how quickly R1 Ryders are developing: this is lush stuff – melodic, bouncy, and a little bit dutty all at once. ‘Just A Feelin’ throws dusty breaks on top of a twitchy shuffle and rubber vocals, while deep-dipping tablas take the place of the ever-present bongos. The most Funky of the bunch is ‘On Ur Marks’, which bounces grotesquely on reinforced steel wheels, but even that gives into dribbling LFO and downward-snaking synths – until the turbulence gives way to a fluffy cloud of g-funk decadence.

Full System is the sort of EP where every track gets you excited about something different, the kind of whirlwind listen loaded with surprising details that makes you forget all about the first track once it’s over, so you have to go back and listen again. And again, and again. The way that these Ryders fuse together so many strands of mutant UK dance musics – full of dramatic overtures, plush percussive touches, and bizarre synths – into one hell of a Frankenstein is so explosive that it almost deserves its own brand name after all. 2011 looks like an interesting year for UK Funky making outroads again, with Ill Blu releasing on Numbers, Funkystepz on Hyperdub, and of course Kode9 releasing his own skewed take on the percussive stuff in the form of a new album, and if there’s any justice, R1 Ryders will be up at the front along with them.