Mr. Oizo: Moustache (Half a Scissor) 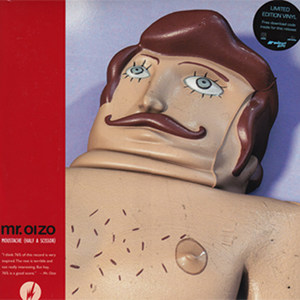 Dismissed at the time of its release in 2005 as “unlistenable” by his own record company (Laurent Garnier and Eric Morand’s F Com), Mr. Oizo appears to have had the last laugh with the reissue of Moustache (Half a Scissor) by Brainfeeder, the label of one of the most revered artists on the current electronic block, Flying Lotus.

With hindsight, it’s easy to see why FlyLo is so enamoured of Oizo’s sophomore effort, and why F Com were so disappointed after the global success of ‘Flat Beat’ and Analogue Worms Attack. This is very much more abstract hip-hop than it is filter house for Flat Eric fans. Tracks are short and discordant, time signatures jump around all over the place.

Yet, in a sense, F Com were right: this is not an album that many people would take pleasure in listening to from beginning to end – it’s as fragmentary as The Faust Tapes, as abrasive as Squarepusher. In less than two minutes, for instance, second track ‘The End’ goes from jittery dirty electro to crackly breaks to a free jazz/ hip-hop fission. Elsewhere the 69 seconds of ‘Vagiclean 2’ start off like a skipping Justice CD and end up in the rehearsal room a surf rock band testing out a new drum machine. Curious rather than essential listening.

That’s not to say that there aren’t some real gems among the 18 tracks. ‘Latex’ succeeds by going to the trouble of building a dark, funky 4/4 groove before ambushing it with noise, effects and counter intuitive rhythms. ‘Berleef’ gradually unpicks a locked tech-house groove before rebuilding it as some kind of shuffling Frankenstein’s Monster of a beat. The single ‘Stunt’ comes closest to a conventional electro track, albeit one on which J.S. Bach is experimenting with chiptune. Best of all is ‘1$44’, which moves from hip-hop showdown swagger via doom-laden chords and portentous electronics to way out twisted ’70s funk in only 2 minutes 12 seconds.

Yet while the future may have finally caught up with its future beats, Moustache (Half a Scissor) remains too willfully contrary overall to impress in anything than patches.