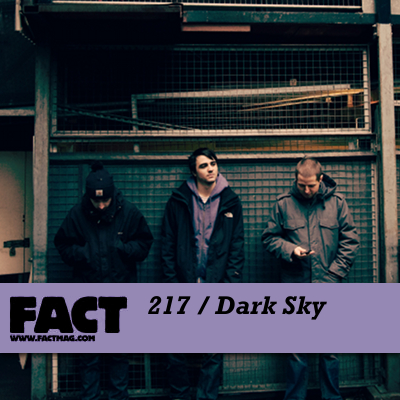 With a rhythmic sensibility that darts between 4/4 house, UK garage and more warped, modernist territory (it’s no surprise they’ve got a single penciled in for Brackles and Shortstuff’s Blunted Robots label later this year), Dark Sky appeared on our radar and then flew straight through it with last year’s gymnastic ‘Reflex’ single and their well-received remixes of the xx and Kelis.

At the end of last year, we asked FACT readers who they’d like to see contribute FACT mixes in 2011, and amongst the usual shouts of Aphex and Burial (keep dreaming), Dark Sky’s name was one that kept cropping up. So contribute they have, with a succinct session that kicks off with Young Turks’ forthcoming Valentine’s Day single, pairing classics from Carl Craig, Burial and Four Tet with recent favourites from xxxy and Lone, and closing on a pair of the group’s own remixes.