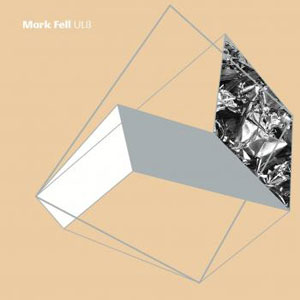 Taking its name from the Celestion speakers that Mark Fell grew up listening to and discovering his passion for synthesized music on, UL8 is the work of a man who has spent his entire life concentrating on pushing the listening experience. It is also his most intensely, almost painfully focused release to date. To label this album as “academic” would be lazy, as Fell employs distinctly complex technical processes throughout all of his work. More accurate would be to say that the compositions here are intensive creative studies of sonic methods.

UL8 works almost exclusively homophonically, with carrier frequency drones being manipulated in time with percussion to create streams of punctuated unison. Presented in three parts, the album is essentially three different approaches to this same musical technique (and a trademark of Fell’s), yet he is a master at creating spectacularly individual results through his choices of technological approach.

Parts 1 and 2 both focus on frequency modulation synthesis, and have both been presented elsewhere previously as recordings and installations. For this recording, however, Fell has added percussion to both, to quite devestating effect. Part 1 is ‘The Occultation of 3C 273’, a five track, 21-minute-long percussive battering of metallic tones tightening and slackening. The result is long arcs of transforming timbre and pitch, the sound of foil and bells fizzing, phasing and crunching, constantly melting and freezing over a desperately insistent rhythmic assault.

Part 2 presents 7 ‘Vortex Studies’, originally found as an installation with syncronised blue light that some will remember from various festivals during 2008. Here the explosive energy of Part 1 is squashed, squeezed and compressed into an implosion of hissing, zipping, fizzing pulsewave tension sustained over 23 minutes. This is a shocking journey through constant movement and variation of rhythmic pulses, unrelenting collisions and multiplications of frequencies pinned by percussion, totally inward facing.

Part 3 shows Fell giving a cheeky nod to label-mate Florian Hecker with his 7-track ‘Acids In The Style of Rian Treanor’. Fell effortlessly gives his own take on the technological principles explored in Hecker’s own ‘Acid In The Style Of David Tudor’, presumably applying multimedia artist Treanor’s reasoning that ‘that the self is non-stable and subject to continual change’. The result is an ever-stretching ribbon of spasming filtration, both gutteral and abrasive. Many of the gestures will be familiar to fans of its namesake, and the execution of them in Fell’s hand give them a totally new, exhilarating context.

Album closer ‘Death of Loved One’ is a humble single track epilogue that allows the tightly wound energy of the preceding hour to shake and spill out into something more recognisably human and cathartic. A resonant square wave drone garbles and wails innocently over a blooming repeating chord sequence of crystaline pads. What feels like the beginning of an epically-lengthed crescendo suddenly, almost self-consciously, cuts itself off and retreats, after only three minutes.

It is likely that some who would be prepared to experience these compositions within the context of an installation will struggle to enjoy this album as a dedicated listening experience. However, this is music that genuinely pushes boundaries, the full force of each section of this release being simply breathtaking. Astonishing, intense and unrelenting, this really is inimitable and important work.