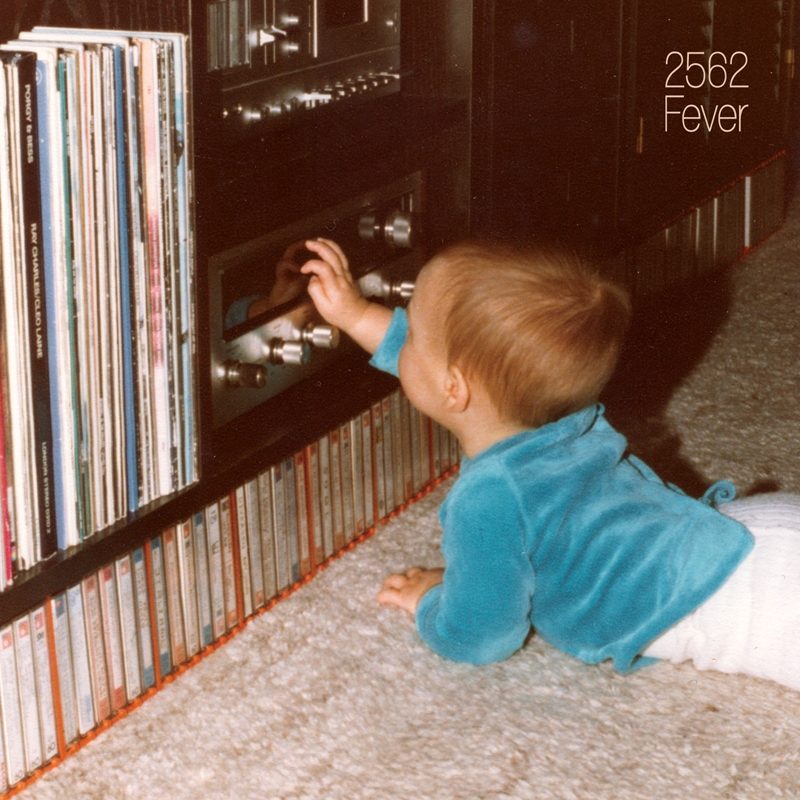 A new album from Dave Huismans is always very welcome: whether its one of his fully-fledged 2562 LPs like the still devastating Tectonic offerings Aerial (2008) and Unbalance (2009), or even an odds’n’sods compilation like A Made Up Sound’s Shortcuts CD, the full-length format is perfectly disposed to showcasing the full breadth of the Dutch producer’s considerable talent.

For Fever, which he’ll be releasing through his own newly minted When In Doubt label, 2562 has adopted a production approach significantly different to his previous work. According to a press release it’s “a thorough reinterpretation of underground disco music from the mid-seventies to the early eighties, with his own birth year 1979 as the gravitational point.” Ever single sound, from the earth-quaking sub-bass on up, is pulled from a disco record – with no additional synthesizers, drum computers or sample sources in the mix.

As Huismans explains in the Q&A below, it was a concept that arose naturally, when he spent a summer taking a break from more electronic sounds and digging around his old vinyl. The fruits of his labour don’t sound remotely retro or pastiche-like – though there’s instantly recognisable disco flavour in some of the licks and all-round funk of the thing, you’d be hard-pushed to guess that it was an entirely sample-based record unless you were told so.

Like the guys from the Soundstream/Errorsmith/MMM axis, Huismans uses razor-sharp editing and remodelling techniques to turn those disco samples into something that sounds utterly contemporary, alien and individual. Tellingly, when he told his pals Martyn and Pinch about the provenance of Fever, they apparently  both replied with something along the lines of: “Sorry, but I don’t hear that whole disco story in there. This simply sounds like you.”

The cover art is pictured above, and the tracklist copied below. Read on to hear Huismans’ thoughts on the making of Fever.

How would you describe the progression between Unbalance and the new album?

“I think the self-imposed restriction of using disco records and basic sample manipulation as my only resources pushed me both musically and in terms of sound design, but most importantly it helped keeping me focused. Both my previous two albums were the result of a long and painstaking process where I puzzled together a sequence out of twentysomething tracks written over a bigger time span. Fever came fast, out of nowhere: I wrote the LP in only a couple of months last summer.

“I set out to write a few simple grooves based on sampling the disco records I had been listening to as a much needed escape from electronic music, and before I knew it it became an album. Just the eleven tracks and that was it. Even the order in which I wrote them largely remained the same on the album, it just worked. As a result the album to me feels like a soundtrack to my personal life during the summer in which I made it. I didn’t perform or travel much that time, so it was a very simple life: sampling records, making music, going for a run, watching the World Cup. Enjoying small things. In fact it was the first time writing an album was simply fun.  ”

“It was a very simple life: sampling records, making music, going for a run, watching the World Cup…”


Why did you decide to start a new label, When In Doubt, now? Surely it’s lots more work for you…

Oh man… getting the album and the 10” sampler out there has cost me a lot more energy than making the music. But I believe it’s worth doing the whole thing from start to finish at least once in my life; it’s satisfactory to make an album with your own two hands, or at least to be in charge of everything yourself. I still fully appreciate the labels that previously released my music, but as I experienced when I took a step back to work on my A Made Up Sound label last year, having an independent homebase works well for me.”

Do you plan to release other people’s music on the label, or is it just for your own productions?

“Releasing other people’s music is a possibility, yes – if I come across something that hits me, preferably genre-free, experimental music that works best in the context of an album or an EP rather than dancefloor 12”s. But running the label is not a purpose in itself. If nothing presents itself until my own next endeavour, that’s OK too. The ellipsis as the label’s logo (pictured above) reflects this. There’s no rush.”

Do you still consider A Made Up Sound and 2562 completely separate projects? Or is there an AMUS vibe to some of the new 2562 material?

“It’s all me, so naturally there’s gonna be intersections between the two. But in my mind they both have their own space. I’d say A Made Up Sound is rooted in techno/house tradition and the 12” format, whereas 2562 has sub as the only constant factor and other than that it’s pretty much become completely freeform, and I feel that functions best on the album format. At least that’s how it seems to have worked itself out lately, I don’t plan these things in advance or think about them a lot.”

“2562 has sub as the only constant factor and other than that it’s pretty much become completely freeform, and I feel that functions best on the album format.”

“I’ve already done one actually, at Todaysart Festival in my former hometown The Hague last September, which had been a great incentive to really focus on developing the Fever material in the first place. I’ve had a good relationship with the people behind the festival for years and the moment they suggested I shold do something special for their 2010 edition coincided with writing my first ‘disco’ drafts. Frankly I hadn’t been keen on the live thing before, it had always seemed pointless to me to deconstruct my carefully arranged music into parts only to play them in a less satisfactory form from a laptop. But with an all-new work-in-progress to present and test out there it made much more sense and it turned out to be a fun thing to do. Now the album is finished, I’m changing it up a bit and will be performing it at my album launches in Berlin and possibly London; maybe also at a few festivals.”

“As I recall one of the Daft Punk guys saying in an interview once: the album is coming, that’s the news [laughs]. But I am quite positive it won’t be the last thing from me this year.”