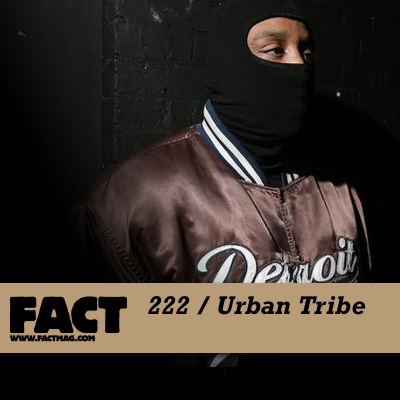 FACT mix 222 is by DJ Stingray in his Urban Tribe guise.

Stingray, real name Sherard Ingram, is one of Detroit’s most uncompromising producers and selectors. Perhaps best known for his association with Drexciya, for whom he was balaclava-wearing tour DJ, Ingram’s own contribution to the music of the Motor City and beyond is enormous.

Ingram has put together FACT mix 222 to help celebrate the 20th anniversary of Planet E, the label that released his 2002 Urban Tribe single ‘Covert Action’/’Rebirth’.  UT began as a solo project, but at various points in the last ten years Ingram has welcomed contributions from three of his close friends, friends who just happen to be legends in their own right: Anthony ‘Shake’ Shakir, Kenny Dixon, Jr. (AKA Moodymann) and Planet E boss Carl Craig. The collective’s first joint effort was UT’s debut album, The Collapse of Modern Culture. Released on Mo’Wax in 1998, this LP was a brilliant fusion of 313 beatdown and, well, downbeat, with elements of electro, jazz, hip-hop, house and techno artfully intermingled. Tracks like ‘Peacemakers’, with its choppily edited horns, stuttering breakbeats and wistful synth sequences, and the eerie, near-junglist  ‘Sophistry’ are but two stand-outs on a seminal album which at the time of writing is criminally out of print (can someone please reissue it?).

One of the things that makes Ingram such a star in our book is how he can nail a groove at pretty much any tempo you care to mention. While The Collapse of Modern Culture unfolded at a languid, almost trip-hop pace, subsequent Urban Tribe releases on Rephlex and TRUST tend towards a breakneck electro sound that our man has made his own – think the aquatic techno-funk of Drexciya invested with some of the pace and priapic energy of ghetto-tech, and you’re in the zone. It’s a sound Ingram has honed to perfection in his DJ sets, and taking it further into the realm of minimalism with 12″ releases as Stingray313.

What’s really interesting is how compatible Ingram’s musical vision is with the current mutant sounds coming out of the UK underground, and elsewhere. You can detect his influence – conscious or otherwise – in the work of Instra:mental, Greena and countless other British producers of note, and tellingly last year he released his ‘Sphere of Influence’/’Sentiment’ single on [NakedLunch], the forward-thinking dubstep label that’s home to productions from Boddika, Scuba and Breakage. Back in the States, meanwhile, Ingram has found common ground with Chicago’s juke school: a collaboration with DJ Rashad is apparently forthcoming.

2010 saw the release of a new album from Urban Tribe, known both as Urban Tribe as Program 1-12. Working once more with Craig, Shake and Dixon (who released the album through his Mahogani Music imprint), this was a supremely accomplished and effective effort, bursting with ideas and attitude, ranging from all-out speaker-bashers like ‘0001’ (like a more elegant take on UK funky) to the streamlined boogie of 00012.

We don’t think it would be an exaggeration to call FACT mix 222 one of the finest the series have ever seen. Ingram has dubbed it his FACT Street Brawl Mix, and it’s easy to see why – this is an epic journey into the tougher side of the UT/Stingray sound, all funked-up, spring-loaded sci-fi electro and radgy, ‘floor-melting techno. Perhaps most significantly, he’s really captured the intensity of his club sets – this thing simply does not let up. We don’t normally like to zone in on specific moments in a mix, but seriously, keep your ears peeled for 23:20 and 29:25 and try not to punch the air when they hit.

To reiterate: this is serious, serious shit, and we recommend that you listen to it LOUD, ideally while driving round your city at night. Don’t have a car? Get one.

You can catch Urban Tribe on tour with Planet E around the world this month and into the future. Sadly Ingram won’t be appearing on the London date, which is March 5 at Ewer St Warehouse (though Carl Craig, Francois K and others will be – further information and tickets on the whole tour here). Oh, and visit the official DJ Stingray Facebook page to download a free and exclusive track.