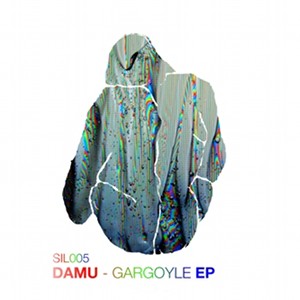 In a world of colorful, gymnastic bass music – or maybe it’s a city, or a country, or a district, whatever – it takes a hell of a lot of glitter and glam for any such phrase to remain meaningful. Manchester’s Damu, one of FACT’s producers to watch in 2011 and rightly so, has this sort of circus sideshow appeal in spades. His instantly recognizable tracks take the spiraling arpeggios of so-called future garage producers and weld them to rock solid house foundations, for tunes that are just as powerful as they are caked in exorbitant amounts of vivacious designer makeup.

The young producers first official release comes on the fledgling Silverback imprint. Damu’s songs have a way of gaudily strutting out of the gates, but his debut is a bit of a shaky and clearly embryonic affair for what is a similarly novice label. ‘Gargoyle’ is for me the clear highlight, teetering on bubbling synths over a tumultuous sea of filtered rimshots and slurping drums. Damu’s melodies are expressed with a giddy excitement, the highest possible register in the chromatic scale like a little girl, a candyfloss excess offset by r’n’b samples which are almost as histrionic. Built out of the same essential elements as its predecessor, ‘LED’ is a more distinctly garage move, gushing synths pushed along by urgent snares while an arpeggio gets tangled in its own elliptical path. Unfortunately, Damu is a new producer – so he’s allowed to slip up – which is just what happens with the barebones ‘Skinnydipper’. Balancing on a reduced frame of percussion and playful whistles, the vocal samples that take precedent never quite gel and by the time Damu is throwing bits of 8-bit gloop all over it, it just feels random, synth notes sliding defeatedly down the walls.

The release is rounded off by three remixes, none of which are entirely essential but occasionally offer a glimpse into an alternate take on Damu’s one of a kind sound. Particularly notable is the Jack Dixon remix, which does the noble thing and rescues ‘Skinnydipper’ with a truly bizarre concoction of ticking tactile beats and toxic, gurgling wobbles. But even its sub-par moments can’t dull the indefatigable brightness of Damu’s music, and this release is only a prelude to the type of extreme day-glo acrobatics he looks set to unleash in the future.