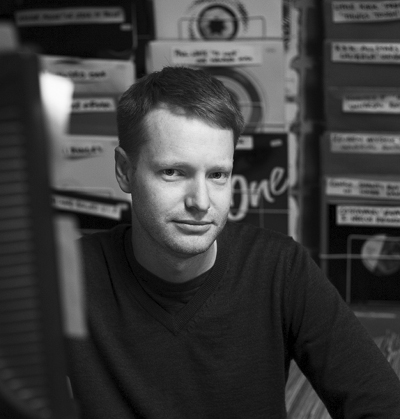 Bristol is one of the UK’s most famous and fertile musical cities, historically home to greats like The Pop Group and the Wild Bunch, and more recently synonymous with the work of dubstep producers like Pinch, Guido, Joker and Appleblim. So it must have a thriving record store culture, right?

Er, wrong. After Rooted Records, the store managed by Tom ‘Peverelist’ Ford, closed down late last year, Bristol was left without a single walk-in independent music retailer of note. Rooted was just the latest in a depressingly long line of great Bristol vinyl emporia to have snuffed it in the last decade, following the likes of Imperial Music and Replay, and when it closed its doors, there was nothing to replace it.

Until now. Chris Farrell, who in his young life has worked at Rooted, Replay, Imperial and more, has bravely decided to stop the rot and open a new music retailing operation of his own. It’s called Idle Hands, after his Punch Drunk-affiliated label of the same name (which has provided a home to house, techno and mutant UKF releases from local boys such as Kowton, Headhunter and Atki2).

Idle Hands the store is situated in a prime location – at 74 Stokes Croft, the proverbial beating heart of the city, close to the former Rooted premises – and it opens for business this Friday, 25 February, with a web-shop set to go live in the coming weeks. If you live in Bristol, or are passing through, you need to pay it a visit.

Farrell has long been a friend of FACT and we were delighted when we heard he was making a last stand in the name of quality underground wax. We also had a few niggling questions, which he kindly answered…

With so many record stores in the city closing down over the last few years, what makes you think you can buck the trend? Is there still an appetite for vinyl in Bristol?

Chris Farrell: “Sheer bloody-mindedness! I’ve seen many record shops close down over the years and for different reasons. There’s no doubt that vinyl has taken a battering recently, but people are still buying. Some genres continue to thrive on vinyl: reggae and certain strands of techno in particular.

What kind of music will you be stocking at Idle Hands?

“To start off we’ll be stocking a similar selection to Rooted, that is the dance music we dance to on Friday and Saturday nights in Bristol – so dubstep, d’n’b, funky, jungle and so on, plus a lot of house, techno and reggae on vinyl and CD. Also tickets for Bristol events. I’m keen to expand on all that but it will all depend on what people are after.”

“The label is run by me as is the shop; I thought it just made sense to tie it all in together. I’m also in the processing of setting up an Idle Hands DJ agency to represent some of our artists.”