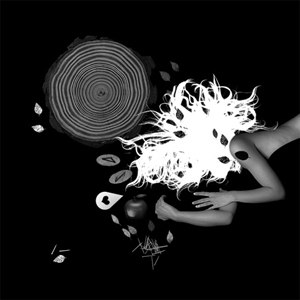 Though I enjoyed Symbiosis, Demdike Stare’s debut album, at the time it felt to me like no more than the sum of its parts: Miles Whittaker’s well-honed brand of galeforce dub-techno (as heard in his MLZ and Pendle Coven 12″ releases on Modern Love) spiced with outernational embellishments sourced from Finders Keepers lieutenant Sean Canty’s legendary record collection. With its nods to doom metal, wyrd folk, radiophonics and all that, it seemed to me so precision-tooled to push the buttons of Boomkat-addicted soundboys that I found it hard to take seriously, though I never doubted its sincerity. As a listening experience, it worked, but conceptually and sonically it was too easy to decode: a patchwork with its thread baldly and distractingly exposed.

Listening to Triptych in its whopping 3xCD entirety – it’s a compilation of Demdike’s 2010 LP releases, with a clutch of bonus tracks included – it’s obvious that Canty and Whittaker have come an incredibly long way since their first offering. Their music now has a real fluidity to it; influences are less obviously signposted, samples more subtly mingled, their provenance near-impossible to judge.

Forest Of Evil is asking not to be taken seriously with that schlocky title (lest we forget, Demdike Stare was originally a project conceived to create soundtracks for imaginary horror movies). In reality, it’s a plenty earnest and august work, though it takes a while to get going. The 15 minute  ‘Forest of Evil (Dusk)’ owes a huge debt to Basic Channel and Chain Reaction, coming over like a slightly more eerie and evolved Pendle Coven. As far as ambient-leaning, dubwise techno goes, it’s beautiful – and the details, like the live-sounding martial snares that arrive midway through, attest to its makers’ adroitness and self-awareness – but it doesn’t feel vital. ‘Dawn’ saves the day, as it were: again, techno is the baseline, but here Canty and Whittaker steep their ship into far choppier and ultimately more rewarding waters. Its driving, loose-skinned 4/4 rhythm makes you feel like witness to some occluded tribal blood-letting ritual, while the heavily distorted squall of voices billowing around it evokes the sonic architecture of Prurient’s Cocaine Death, not to mention the chemical ennui it took as its subject. The coda is an abrupt change of gear: a stately synth miasma that oozes around the notional space between Vangelis and Scott’s rain-sodden future Los Angeles and the haunted Berlin of Leyland Kirby.

Second disc Liberation Through Hearing is full of ravishing and radical moments. The opening ‘Caged In Stammheim’ is typical Demdike in its coherent synthesis of elements that oughtn’t to fit together at all: in this case Zomby-esque dancehall gloop and a tower of female voices as stirring and admonishing as a Morricone chorus heard through the toilet wall of Tresor. ‘The Stars Are Moving’ and ‘Eurydice’ recall the sub-heavy power electronics of Demdike-affiliated Suum Cuique; eldritch drone music sculpted according to the tastes and instincts of techno, as opposed to noise, sensibilities. ‘Regolith’  and ‘Bardo Thodol’ demonstrate how powerful this duo are when they foreground rhythm, the former coming over like Monolake if they were inspired by Middle Eastern music as well as the inner life of machines.

Voices of Dust is first and foremost consolidation of what’s come before, and while it offers no great surprises, it’s probably the most satisfying Demdike Stare LP in and of itself. ‘Hashshashin Cant’ is extraordinary, Canty and Whittaker looping incantatory Asian vocals and tablas into a juke-like storm, before a breakdown into dead-eyed, heavy-load industrial dubstep. Whereas on the previous discs such stylistic handbrake-turns feel abrupt, here they’re smoothly executed. Overall Voices of Dust is a more immersive, less obviously explosive entry in the Demdike catalogue than its predecessors, consistingly mainly of drifting, drone-oriented productions. But these beatless pieces don’t sound ambient, they sound malevolent, and without recourse to explicit sonic violence. Real hands-around-the-throat stuff from a duo whose intrepid musical journey is only just beginning, and with whom we’re privileged to be riding shotgun.