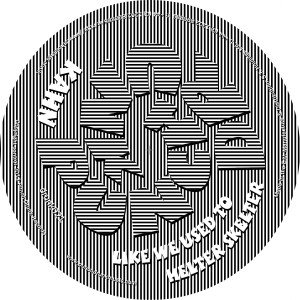 Punch Drunk just have a way, don’t they? Always plucking gems from the seemingly endless groundswell of new talent in Bristol, Peverelist’s label makes a strong entry into 2011 with the official debut from new producer Kahn. A garage exercise so catchy it’s almost straight-up R’n’B, ‘Like We Used To’ is one of those tracks that makes an incredible first impression and never loses its vicelike grip. First heard leading off the mix Peverelist did for my own Futureproofing blog in memorable fashion, the track bows and leaps with swooping anti-gravity mechanics, a kick bobbing on sine waves straightened out by hissing hats. But the track’s biggest feature is its vocal sample, and it’s a doozy: an uncanny masterwork, the pitched-up vocal shudders, moans, and begs, and the way Kahn cuts off words and phrases only enhances the choked desperation.

Blasting off with an 8-bit breakdown that shines and twinkles like a constellation light show, it’s the quintessential Punch Drunk track, combining incredible melodies with monochrome dub sonics a la Peverelist himself (check those staggered, cracked drum hits). Preferring a slightly more straightforward dubstep template, ‘Helter Skelter’ is no worse if not anchored with the same kind of outside accessibility as its counterpart. Focusing on flattened, airy textures, the track mostly favours gut-wrenching kicks and an insistently vamping chord that occasionally gets bent into hoover-esque melodies, bits of debris shooting off with blazing trails. Kahn is an exciting newcomer in a world that doesn’t really need any (ecstatic, vocal-heavy nu-garage), but his woozy beats have a way of floating up above all the rest and surfacing in gorgeous clarity.