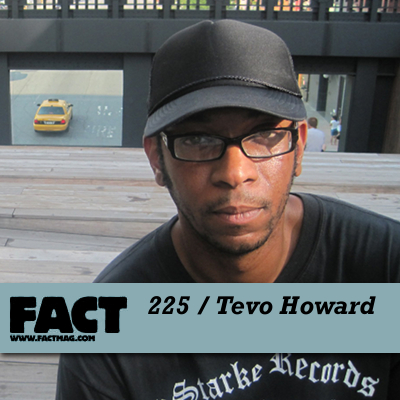 We say “emerging”, but Howard has been spinning records since 1987, when he’d barely hit puberty. Growing up in Chicago at that time, it was perhaps inevitable that he’d catch the house bug; but his interest in music went beyond that, and he would later study music and bass guitar at college (this would be the first of several degrees in different subjects embarked upon by the academically gifted, but eternally restless, artist).

In 2006 Howard took time out from university to build his own studio, Beautiful Granville Studios, and by his own estimation that’s when his real career began in earnest. In 2008 he began putting out records via his in-house Beautiful Granville imprint, kicking off with a 12″ from Rick ‘Poppa’ Howard but concentrating largely on his own productions. Dedicated fans of Chi-town dance music quickly picked up on Howard’s striking tracks, which combine raw dancefloor jacking with uncommon depth and musicality.

The Rush Hour-released ‘Move’ and below-radar club smash ‘Without Me’ introduced Howard to a larger audience, and in 2010 the latter track was relicensed by Rebirth for a vocal version featuring Tracey Thorn. Rush Hour, meanwhile, put together a 2×12″ doublepack of sumptuous analogue productions from Granville HQ, Crystal Republic,which for us is this producer’s most formidable statement to date. A new album, his debut proper, is set to follow on Rush Hour later this year.

Most recently Howard has entered the Buzzin’ Fly fold, with the release of ‘The Age of Compassion’. He’ll be appearing at Buzzin’ Fly’s Spring Party at Cable in London on Saturday 5 March, performing separate DJ and live sets, alongside Ben Watt, Chris Woodward, Marcus Worgull and Prins Thomas. More information on that night here.

To herald his visit to London, our man has handed us a rollicking mix of cask-matured house classics, recorded live in Jerusalem earlier this month. You need only look at the (rather sketchy) tracklist below to know what pleasures await you: this is the warm, wild and authentic sound of Chicago, and it feels more vital than ever.