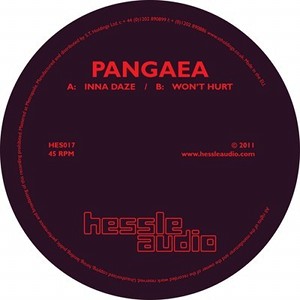 While David ‘Pearson Sound’/’Ramadanman’/’Maurice Donovan’ Kennedy spent 2010 taking over the world under a number of aliases, Pangaea, the other in-house producer at Hessle Audio and traditionally the star player of the two (until the birth of Pearson Sound, it seemed that Rama had the consistency while Pangaea pulled out the label’s peak turns in ‘Coiled’, ‘Router’, ‘Memories’ et al), laid in wait.

Pangaea’s self-titled double-pack, released around a year ago, showcased his music in the midst of a hardening process; taking the fever-riddled, hallucinatory garage of ‘Router’ and toughening it up around the edges. ‘Inna Daze’ and ‘Won’t Hurt’ seem to represent the realisation of that process; drums flexing and muscling each other in and out of position, creating an suitably edgy, paranoid bed for the vocal shrieks of ‘Inna Daze’ to drift in and out of. ‘Won’t Hurt’, meanwhile, is even more widescreen and banging, with a wobble bassline and the sort of cinematic synthline that Busta Rhymes would have murdered in his prime.