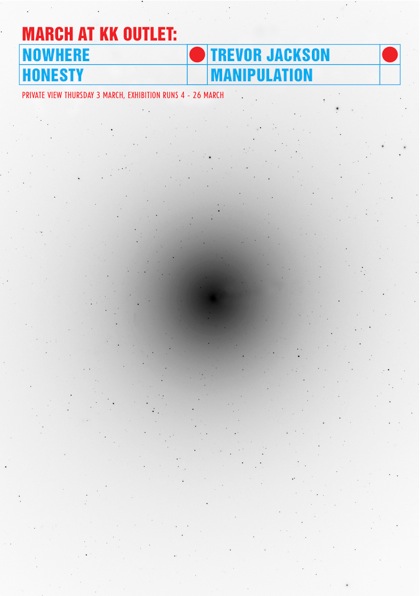 The KK Outlet gallery in Hoxton is presenting the first ever solo exhibition by Trevor Jackson.

Jackson is perhaps best known to music fans for his now defunct Output label, which introduced the UK to The Rapture and Circlesquare among many others, and for his own recordings as Playgroup. But it’s as a visual artist and designer that Jackson has worked most extensively, with work shown at such spaces as the ICA, The Guggenheim and Barbican, and a number of prestigious awards under his belt for his striking Soulwax sleeve art.

The work in Nowhere is more personal,pensive and troubling than you might expect from the clean lines and direct attack of Jackson’s commerical projects. The catalogue is comprised of video and photographic studies purportedly exploring themes of honesty, simplicity, manipulation and ego.

“Graphic design is essentially problem solving,” says Jackson. “You’re responding to a brief and reflecting the client’s personality and opinions.

“As much as I still enjoy that process, this new work is expressive and at times cathartic, something that has little place in much of my commercial work.”