Regular readers of FACT will be aware of our undying love for John Foxx.

The dapper synth-pop pioneer (pictured above, back in the day with Gary Numan and friend), who first rose to prominence as frontman of pre-nonsense Ultravox before embarking on an inspiring, questing solo career that has seen him release one of most perfectly realized and influential electronic records of all time (the stark, Ballard-inspired Metamatic) and such ambient masterpieces as Cathedral Oceans and Drift Music + Translucence, working with the likes of Eno, Harold Budd and Robin Guthrie along the way. Unlike so many of members of his generation, Foxxy hasn’t stopped pushing himself artistically, and he’s currently gearing up to release the debut album from his new project, John Foxx & The Maths, a collaboration with synth wizard Benge.

Last year Foxx made a triumphant return to the live arena with a huge show at The Roundhouse as part of the Short Circuit festival. On April 2 he’s back on stage, this time in the more intimate but no less grand environs of London’s Troxy. It’s part of the Back To The Phuture event curated by Wall Of Sound’s Mark Jones; as well as a set from Foxx they’ll be one from the mighty Gary Numan and support from EBM/techno perennials Motor.

It’s clearly going to be a fine old time, and we’ve got a pair of free tickets to give away; to be entered into the draw, simply e-mail your name and the words ‘John Foxx’ to competitions@thevinylfactory.com. The winner will be notified on or before March 31. 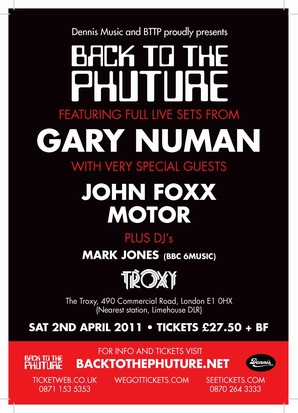