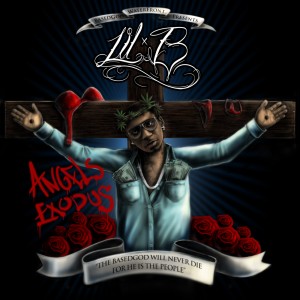 God knows it’s hard to keep up, but I’m pretty sure Angels Exodus represents the fourth full Lil B album, and his first recorded in a studio.

Which begs the obvious question, what does a Lil B album even mean? When someone releases as many mixtapes and free music as Brandon McCartney does, an album can go either way – it could be a landmark release, contextualised by, but ultimately standing above the huge discography of mixtapes, or it could be just another release, to be forgotten about once it’s out (past Lil B albums certainly seem to have gone that way). As Swizz Beats like to say, on to the next one.

If nothing else, Angels Exodus gives Lil B the chance to indulge his significant conceptual side with some confines – namely, those of a ten-track album as opposed to an mp3 mixtape with no restrictions on length. And so we get a loose theme of Lil B against the undead: zombies, vampires and more are pitted against our hero, with the point that these are metaphors for real life people made as hammily as you’d expect (“I’m talking about death not death”, “I can see it in they faces / dead zombies in the hood”, etc.) It was never gonna be any other way.

Therein lies the problem with reviewing a Lil B album. So much of his music is about taking the rough with the smooth; it’s the lasting moments of genius that stay with you, but you’ll only see them once you’ve embraced the nonsense that surrounds them. The minute you start picking holes in Angels Exodus the way you would another album (such as for the singing on ‘All My Life’, or sampling Evanescence), the whole house falls down. It’s like criticising Ariel Pink for his bass playing.

The only fair way to evaluate a Lil B album is against other Lil B albums/mixtapes, and in terms of quality, he’s certainly released better. Angels Exodus does contain two Lil B classics though, and both come when he takes the undead theme to its most triumphant and mournful extremes. The former, ‘Motivation’, is a clipped banger driven by a pitchshifted Drake sample (I think) that’s 50% Dipset and 50% How to Dress Well, while closer ‘1 Time’ finds B toasting lost ones while trying to not become a zombie himself. “I already think I’m gonna die from the way I’m living / I’m by myself eating fast food on Thanksgiving”. As with all Lil B, there’s a lot of humour to be found in Angels Exodus, but moments like that hit pretty hard.