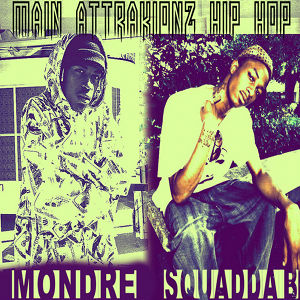 Main Attrakionz are an Oakland rap duo ”(Squadda B and MondreM.A.N., first two ‘chapters’ (members) of the Green Ova rap collective alongside Dope G, Lolo and Shady Blaze) currently attracting rap nerd attention with their distinctive mixture of Bay Area bounce and experimental, even avant-garde, use of samples. Influential rap blog Space Age Hustle has collected Main Attrakionz, along with Lil B and a number of other acts under the loose but evocative term ‘Cloud Rap’, and a quick listen to ‘Loud Pack’ will help you to understand why that term so eloquently applies to them. The beat, by Nem 270, is all dreamy, soft-edged cloud-chords floating on a breeze in reverb-space, and there is something floaty about the rapping too – each sung “(loud) paack” drifting as if the MCs are being carried away by the breathy exhalations of the beat.

They are also, of course, being carried away by ganja smoke (“I get real high til I’m outta space”). A loud pack is, according to Webster’s Urban Dictionary “a bag of Kush … that is sooo loud [stinky] it overpowers every scent.” The ‘Loud Pack” here is as much Nem’s highly potent beat as a bag of skunk, casting a strange and overpowering aroma over the vocals. On other Main Attrakionz tunes the MCs are obscured by the thick veil of sample weirdness they are ostensibly rapping “over”, almost as if you’re sitting in a smoky room with them, having to strain your red-rimmed eyes (or ears) to see if they’re still there behind the fog.

These clouds are as much herbal as mystical, and I think it’s Main Attrakionz’s grounding in a real, physical world that makes them as raw as they are abstract. Squadda and Mondre aren’t talking about riding a Unicorn up a rainbow into the cloud-cleavage of Mother Nature here; they’re talking about riding around Oakland, California. Their day to day life there, as they depict it, is gritty, sometimes dangerous (“Roll up to us if you think you colder”). A harsh reality, but one which, by striding head-space first into the vapours of weed-smoke and weird-music, can be transformed imaginatively, somewhat softened at the edges.

But for all this talk of cloud-rap, this is not soft music. As Space Age Hustle also noted, Main Attrakionz have a “lo-fi sensibility” (something that’s plain to see in their videos) and their beats, while often dreamy and hazy, filled with gentle samples, are rarely vaporous and never insubstantial. The stuttering thump of ‘Loud Pack’s drums gives a rhythmic weight and soft-serration to the track which typifies Main Attrakionz commitment to keeping their feet on hard(core) ground, wisely ensuring that their heads are only ever partially in the clouds.