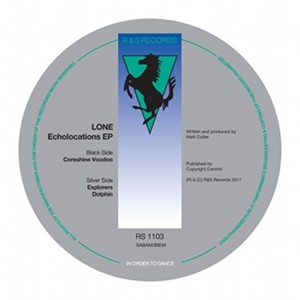 It’s been nice watching Lone grow over the last five years. The Nottingham producer came on to the radars of some with half-baked but enjoyable hip-hop tracks that eventually formed into a cohesive, lens-flared full length for Werk Discs, 2009’s Ecstasy and Friends. It was 2010 though, where he really found his own sound: a daydreamed vision of rave music with the signature traits of your 808 States et al, but conjured up with a childish imagination reminiscent of the Modern Lovers. Emerald Fantasy Tracks, ‘Once in a While’ and ‘Pineapple Crush’, all released that year, marked his best three releases; for most, they represented Lone’s arrival.

Echolocations, a six-track double-pack EP for R&S is comfortably of the same quality as Emerald Fantasy Tracks, but listening to it, it’s hard to shake the nagging truth that this is far from a seismic shift from Lone’s 2010 releases. It’s not even a massive development. Talk of progression and the future is always boring, and I’m not saying for a minute that Echolocations should be some grand new genre in itself, merely that it spends half its time sounding like minor expansions on Emerald Fantasy Tracks, and the other half like outtakes. Listening to it is pleasurable enough, but like a collector’s edition of a great film (priced at £17 for the clear vinyl edition! [edit: it’s cheaper on the R&S website – see comments]), it’s pretty far from essential when you’ve already heard the original.

There are notable highlights. ‘Blossom Quarter’ is one of Lone’s punchiest rave tracks to date, bashy drums shaken up in a snow-globe only to fall as 8-bit synth lines, while ‘Coreshine Voodoo’ sounds classic from the off. But as enjoyable as the other tracks found here are, those already in possession of last year’s Lone releases would have to indulge their collectivist side to stump up for these. Those unfamiliar, however, will quite possibly fall in love.