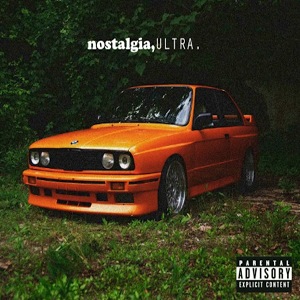 You may already know the story with Frank Ocean. A songwriter who’s penned material for John Legend, Justin Bieber and more, he signed to Island Def Jam around a year ago and proceeded to sit on the shelf (sound familiar?). Last month, he gave his debut album, Nostalgia, Ultra away for free; a move that may have proved smarter than any Def Jam could’ve pulled – he’s now supposedly working with Beyonce.

Nostalgia isn’t just the title of this record – it’s all over it. The first sound you hear on the album is a tape deck rewinding; its first line, “when we were kids.” Later, Ocean sings over MGMT’s ‘Electric Feel’ and The Eagle’s ‘Hotel California’. On the album’s high-points, most obviously the breath-taking ‘Novacane’, this nostalgia’s extremely effecting, honing in on very specific moments and exploring their lasting power. At other times, you start to wonder if Ocean’s got anything else to talk about – though given the hammy side of him he indulges on ‘We All Try’, maybe there’s something to be said for sticking to what Ocean knows best: girls and childhood. It certainly fares him well on album centrepiece ‘Songs about Women’.

Nostalgia, Ultra is more a mixtape than an album, and with this comes a level of natural inconsistency – though the fact that you can imagine Def Jam pulling many of its more lasting moments certainly vindicates Ocean’s decision to self-release it. Still, if he becomes a superstar then there’s a few songs from this mixtape that long-time fans will doubtless be citing as classics for years to come; for that reason alone, it’s worth your attention.