An offshoot of the main Unsound event in Poland, virtually alone among international festivals in its ability to champion off-kilter and interesting music without descending into wankiness, Unsound NY promises performances from the likes of Ben Frost, Kode9, Lustmord and Carlos Giffoni (to name but a few) across various venues in the Big Apple.

One of the stars of Unsound 2010, which was themed around “horror – the pleasure of fear and unease”, was Hollywood soundtrack composer Alan Howarth. Best known for his seminal, synthesizer-based collaborations with John Carpenter, Howarth still has a lively musical imagination, one which would put many younger artists to shame. Having previously performed with Carpenter devotees Zombie Zombie, the great man is now linking up with the Unsound family in his home nation for a collaboration that is basically any self-respecting synth nerd’s dream. Yes, Howarth will be taking to the stage with Emeralds, the Ohio trio responsible for some of the most mind-melting and moving neo-kosmische music of recent times. Emeralds will also perform sans Howarth, and there will be solo sets as well from Howarth and Harald Grosskopf, the great unsung hero of German electronic music whose classic LP Synthesist was recently reissued by NYC’s Rvng Intl. More info and tickets for the show, a co-production with Rvng Intl.’s FRKWYS taking place at Le Poisson Rouge on Friday 8 April, here.

FACT regulars will be well aware of how much, and why, we adore Emeralds. Their Does It Look Like I’m Here album, released by Editions Mego, was one of our favourite full-lengths of 2010, and more recently we’ve been getting excited about Spectrum Spools, the new Mego sub-label operated by the band’s John Elliott and home so far to dizzying albums from Bee Mask and Fabric. Anyway, great as they are on record, it’s in the flesh that Emeralds really shine, their music so much more tactile and organic, ultimately more transcendental. Their live set at Unsound Krakow last year, in the old Engineering Museum, was mesmerising to say the least, and we’re delighted now to be able to offer it to the world as a free download and stream for the very first time. Enjoy. [Photo credit: Anna Spysz] 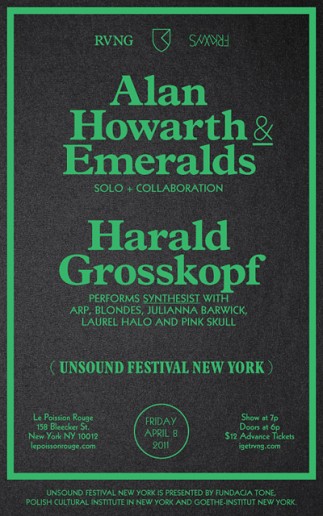