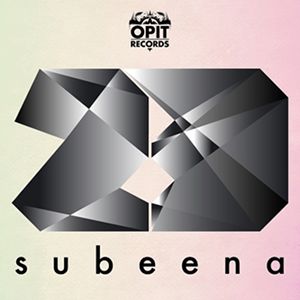 23 is a collection of past Subeena material, mostly released in 2008, when she was 23 years old.

A retrospective this early in an artist’s career might seem odd, but Subeena appears to have stepped into the second phase of her musical career this year, with tracks that focus as much on her own vocals as her production, so perhaps 23 has been collected as a means to close that first chapter. Either way, there’s plenty of worthy material here that people will have missed the first time around, even if little of it is as realised as the stuff she’s making now.

‘2080’ and ‘Boskt’ are the two most recognisable tracks here, both originally released on a self-titled EP from 2009. They’re different sides of a coin made from sighing, ice cold lead-lines and drums that twist their shoulder to every corner of the grid when they snap, and they’re the best tracks here – with delicacy and presence in equal measures. ‘System Message’ and ‘Znare’ showcase Subeena’s harder side, with studied bass hits that seem to melt into the floor as they disperse, while ‘Dereflex’ is manically psychedelic dubstep in the same vein as Loops Haunt’s ‘Rubber Sun Grenade’.

Hardly essential then, but a pleasant prelude to the new Subeena material due this year, and a reminder that despite a relative lack of hype, she’s been one of UK dance music’s more consistent performers in the last half a decade.