Peverelist: ‘Dance til the Police Come’ 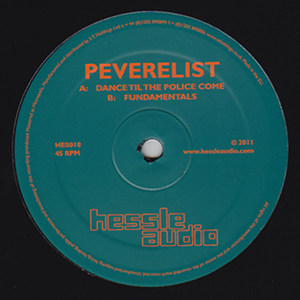 You could conceivably go on about Peverelist’s worth to dance music all day. Hell, if there is still a hardcore continuum then Peverelist’s where it’s currently located – a one-man distillation of jungle, hardcore, garage, dubstep and much more who makes every second of his tracks count, subconsciously soaking them in history but with no given intention other than to make the present dance.

He’s obviously, from a technical stand-point, a fantastic producer (his rolling junglist drums key, but let’s not forget the street-clearing synth chords he’s prone to pulling out; always perfectly-timed), but at the heart of Peverelist’s tracks is almost always one very simple, often two-note melody that he hammers, and hammers, and hammers until breaking point. ‘Dance ’til the Police Come’ is no different – it’s all about that one melody being pulled in every which direction, but with both eyes firmly on the end of the tunnel. As FACT’s radio show presenter recently observed, it’s like the “last 15 years of raving rolled into one”. On point.