The Weeknd: House of Balloons 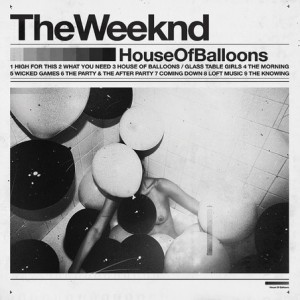 This time last month, barely anybody had heard of The Weeknd. Now, it’s everywhere, and typically, a lot of the coverage has missed the point.

Writers from The Guardian, Pitchfork and more have already rushed to bracket this loosely anonymous project in with the dissolved, r’n’b inspired music of How to Dress Well and Holy Other. The connection seems to have been mostly made on the basis of the project’s vague anonymity and aesthetic (accurately described in said Pitchfork review as Spiritualized-meets-tumblr art porn), because musically there’s little that’s similar. At its heart, The Weeknd is just r’n’b – sure, it’s eccentric and ambitious, it doesn’t sound like it’s been made in a million dollar studio, and there’s a penchant for melting down songs into pools of post-production effects, but there’s also a thousand times more clarity here than what people are comparing it to. Some low-pass filters don’t suddenly make you Balam Acab.

One of the defining characteristics of your Holy Others, How to Dress Wells et al is shyness: the lyrics are hard to distinguish, and often sampled rather than the artist’s own. Sure, there’s a sadness to House of Balloons, but “better than your next man / and if we swingin’ I get dumber than the next man”? This album’s anything but shy – it’s fueled and numbed by coke, sexed out to the absolute max. It tugs your heartstrings by being unfulfilled and lonely despite all the glamour, drugs, girls and money, making you simultaneously relate to the artist while being in awe of their lifestyle. A new direction for r’n’b? It’s the oldest trick in the book, and writers who’re doubtless familiar with The Clipse, Jay-Z, N.E.R.D, Drake and the countless others who’ve pulled it in the past ought to know better.

It’s a shame, because House of Balloons features some fantastic songs that deserve to stick in people’s memories long after writers forget about tumblr’n’b or whatever they’re going to call this great non-genre. Drake’s Thank Me Later has clearly been an inspiration here, right down to the use of well-timed swearing and the juxtaposition of clichéd hood signifiers with regret-filled moments of poignancy. The Weeknd doesn’t deploy the latter as effectively as Drake, but it certainly slips up on the former less.

If The Weeknd blows up, then ‘The Morning’ will be the track that does it. One of the few songs on House of Balloons with a straight verse-chorus-verse structure, it’s got the hook and the slightly silly quotables (“drinking Alizé with our cereal for breakfast”; “got the walls kicking like they six months’ pregnant”) to make it. Most crucially, it doesn’t try to be too epic – even at a reasonably lengthy 5:14, it’s still the third shortest track on here. But, like Drake, it’s at The Weeknd’s most ambitious that it’s strongest, ‘The Party & The After Party’ a stunning two part symphony of soft guitar, distant duets and a bassline that rises and sinks like a fluffed pillow, and ‘Loft Music’ an intense stand-off that disperses into a cacophony of wails.

I don’t want to overuse the Drake comparison, and there’s certainly plenty to suggest that The Weeknd’s just as inspired by R. Kelly and The-Dream (frankly, who makes r’n’b and isn’t?), but you could easily call House of Balloons the Tyler Durden to Thank Me Later’s Ed Norton. You relate to Drake, but you don’t want to be Drake; to paraphrase Durden, you don’t want to fuck like him. When The Weeknd grubbily whispers “trust me girl, you wanna be high for this”, it’s a whole other story. This is a record that’s as ice cold as it is sad; for those who find Drake too much to stomach it might be off-putting, but for fans of the Canadian, it might just mark the arrival of a brand new obsession.