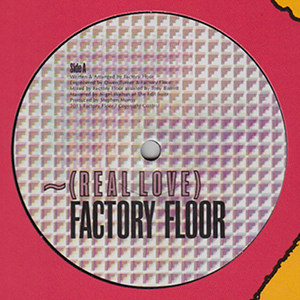 When I first heard this record was completely bowled over. So trippy, I thought, so fucked-up, so boldly zombie-paced. Then I realised I was playing it at the wrong speed. Still, it kicks arse at 45rpm too.

Personally I think Factory Floor are a wee bit overrated; though their brand of tech-savvy but pared-down on no wave electronic rock is undeniably appealing, and their live sets reliably powerful and punishing, I do wonder if they bring anything new to the table, whether they’re doing much more than re-heating old ideas and hiding it behind their slender black-clad silhouettes and none-more-steely gazes. No matter how loud or how intense their music gets (usually very loud, very intense), it never feels particularly searching and insurrectionary to me; it feels… comfortable. While it’s impressive that they’ve earned the not cheaply given patronage of Chris Carter, Cosey Fanni Tutti, JD Twitch et al, I wonder whether these venerable older cats dig FF largely simply because it reminds them of days gone by. There’s nothing wrong with having post-punk and industrial influences, but for me the likes of The Soft Moon, Raime, aTelecine, Cold Cave, Religious Knives and Tropic of Cancer (to name but a few) stretch such influences into more interesting and original shapes than Factory Floor, and do so with a tad more aesthetic panache.

But that’s just me, and when all’s said and done, ‘Real Love’ is a bit of a belter, driven by a hi-NRG arpeggiator, crisp percussion and languidly over-sexed vocal drones – an unashamedly trancey departure from the band’s usual dead-eyed motorik fare, it reminds me of nothing so much as peaktime early noughties electroclash, and it would doubtless have ruled the ‘floor at Nag or Trash if it had been released back then, or if either club existed today. On the flip, J.D. Twitch’s Optimo Espacio mix adds some more atmosphere and structural drama to proceedings, stretching out the builds and running riot with distorted synths tones in order to help the kids rush harder off their shandies.