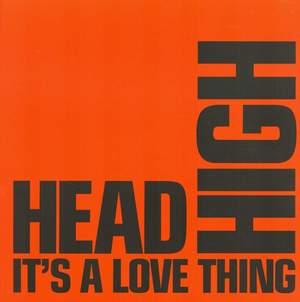 Originally released last year in a puny vinyl run, the appeal of ‘It’s A Love Thing (Piano Invasion)’ has endured well into 2011, and thankfully it’s now been reissued by H2 Recordings with killer, appositely ’90s-style sleeve art and a brand new mix.

Head High is another alias of Rene Pawlowitz, the German producer best known as Shed; committed fans of his work will instantly detect his signature inscribed in ‘It’s A Love Thing”s steamrolling kickdrums, clipped chords and scuffed yet lively hi-hat patterns. It’s a pleasing departure from his most recent album, the dubstep/IDM-leaning and frankly rather constipated The Traveller, and it lives up to its subtitle – powered forward by an insistent, feelgood piano vamp. Pawlowitz is invariably at his best when making music that’s unashamedly club-geared; his incredible grasp of rhythm mechanics, which is sometimes wasted on his more sober album material, is thrillingly and exactingly deployed here – even more so on the new ‘Island Mix’ of the track, which feels less clenched than the original, but more linear and pounding – with the kicks sped up and beefed up and pelted with cymbal crashes.