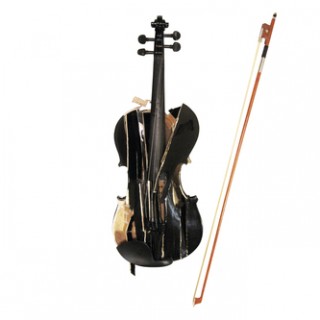 After last year’s acclaimed Porcelain Opera, the multi-aliased Jeff Witscher returns in his Rene Hell guise for another long player, The Terminal Symphony. Building on the neue-Kosmische template of his previous effort, Hell has once again delivered a work that refers to the past while sounding vigorously of the present.

The ‘symphony’ begins with a cluster of hard, looping, disharmonic analogue sounds, layers accumulating organically before subsiding into a stately synth chord coda. The tonal variations of the opening ‘Chamber Forte’ are typical of the album as a whole, which, though often built around loops, never settles into the rigid, predictable patterns beloved of many electronic music makers.

Instead, The Terminal Symphony is a recording rich in detail, one that nods towards Switched-on Bach, Sky and Schwann records without trying too hard to emulate them. Rather, the Froese-esque arpeggiation and Cluster-like tones of ‘Quiet Detail Muse’ sound entirely unforced, the Walter/Wendy Carlos references of the baroque ‘E.S. Des Grauens in Fifths’ delightfully simple.

Better still is ‘Juliard op. 66’, a dense electronic jungle of mid, low and high notes, runaway piano and analogue brass, which is unexpectedly overpowered by a serene organ that sucks up elements of the original motif like a musical black hole until nothing else remains.

‘Detuned Clarinet; 9.67’ is another highlight, at first sounding like Neu!’s magical ‘Leb’ Wohl’ patched through an analogue filter, before resetting itself and generating music out of the bleeps and test tones of a 1950s telephone exchange. A highly original take on Space Age electronica.

With a gamut of beautiful-realised machine sounds that ranges from the harshness of ‘Baroqueworks Ensemble Coda’ to the bittersweet tones of ‘Adagio for String Portrait’, The Terminal Symphony is a work that deserves to make Rene Hell known to an audience beyond fetishists of 1970s West German music.