Soundcrash’s takeover of Koko in London on June 11 is looking big.

Headlining is Harmonic 313, the bass-savvy alter ego of Global Communications’ Mark Pritchard. Pritchard and Steve Spacek recently dropped their debut album as Africa Hitech, 93 Million Miles, on Warp, so you can expect to hear some bashy highlights from that record alongside numerous gems pulled from his deep collection and towering pile of upfront dubs.

Kode9, who has recently released an album of his own, drops in to play a special DJ set. It hardly needs repeating that the Hyperdub boss on form is a selector without compare. One of his star signings, King Midas Sound – the “21st century lovers rock” project of Kevin ‘The Bug’ Martin – will play a live set.

This looks set to be an unmissable evening of woofer abuse; for more information and tickets visit Soundcrash here. 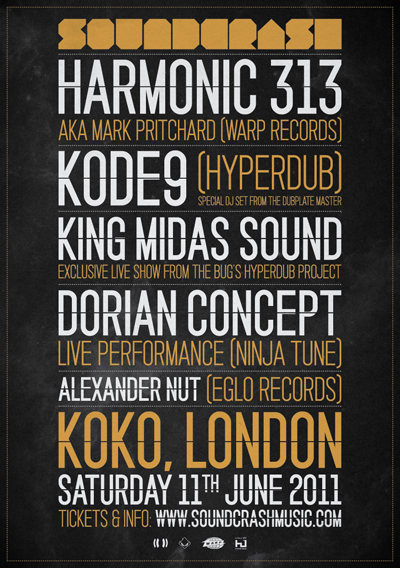